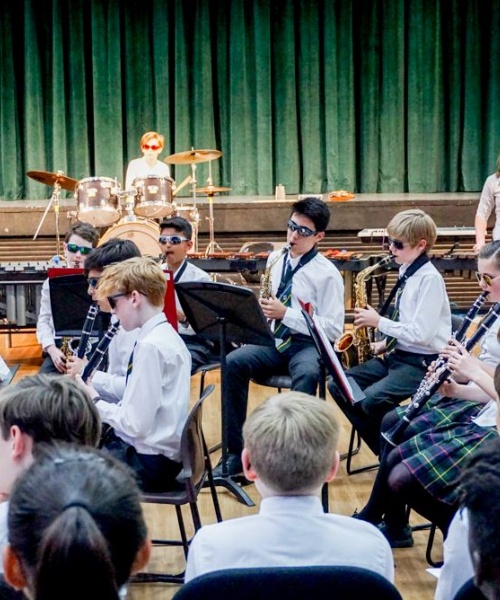 The St Benedict's Middle School Concert, on June 14th, gave pupils in Years 7 to 9 a chance to showcase their musical talents. The standard was high and the programme included an impressive range of instruments and styles.

The audience enjoyed performances from St Benedict’s many instrumental ensembles. A very cool looking Wind Band opened the concert, with the theme from Mission Impossible, followed by When she loved me from Toy Story 2.

The Brass Group played two fun pieces: Brass Bop and Slinky, and the Guitar Ensemble played Cake by the Ocean. There was a dizzying performance of Defying Gravity from  the Clarinet Ensemble, and the String Group brought classical elegance to proceedings with Mozart’s Divertimento in F Major (K138). Finally, the Middle School Percussion Group knocked out Soul Limbo (aka Test Match Special), in honour of the Cricket World Cup.

There were some excellent solo performances, too, performed with confidence and style. Saho Matsushita played Debussy’s Arabesque No 1 (piano); Natalia McFadzean sang a song from Fiddler on the roof – Far from the home I love; and there was a dazzling drum kit performance from Sebastian Zecevic, who played Foo Fighters’ Rope.

When she loved me: (Randy Newman - from Toy Story 2 - Arr. Johnnie Vinson)

Natalia McFadzean: Far from the home I love (Jerry Bock  - from Fiddler on the roof)

Cake by the Ocean (DNCE)