a trip to Normandy 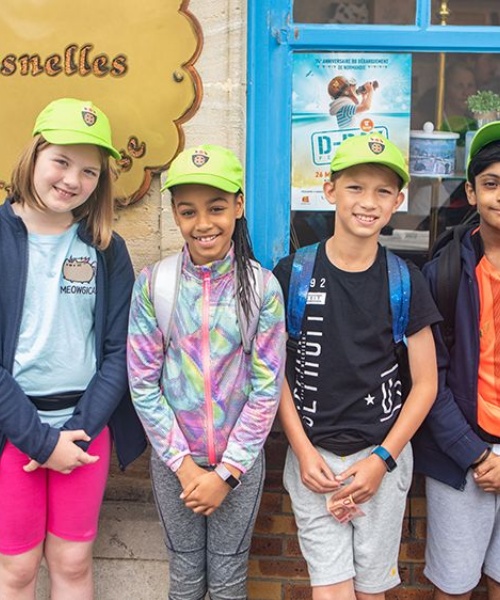 Children in Year 5 enjoyed a wonderful trip to Normandy, practising their French and learning about the history and culture of the region.

Recollections of the French Trip

On Monday we arrived at the château. We had a great dinner. My room is wonderful with bunk beds. The staff are really kind. Outside, there is a heated swimming pool and beautiful grounds.

The American Cemetery - Jake and Sena

It was World War 2 between 1939 and 1945. The German forces were taking over. Much of France was occupied and the Allies had one last chance to fight back. On D-Day, Operation Overload was launched.

Calais was the expected place for the attack to happen as it is closest to England. Hitler was so convinced that he sent reinforcements to protect that region. On 6th June, 1944, the Allies stormed 5 beaches in Normandy: Sword, Gold, Juno, Utah and Omaha.

Omaha suffered the worst casualties. Many drowned getting out of the landing craft as they had 60 kilograms of equipment on their backs. The Germans planted obstacles on the beach to prevent the Americans get up the beach. If you look at the beach from the cliffs you can see how easy it would have been to gun down the American soldiers.

The American Cemetery is where over 10,000 service men and 4 women are buried. It was raining while we were there but we walked around looking at the graves. We were amazed at how big and beautiful it is.

I was so excited when I woke up this morning as I knew I was going to see the historic Bayeux Tapestry. We walked through a park and finally got to the building which holds the mystical tapestry. We entered, queued for a minute and picked up our audio guides. I stuck mine in my hat so I didn’t have to hold it. When we finally saw the tapestry my brain nearly exploded! How could somebody make that? It must have taken years. By the end, I felt emotional. I don’t really know why but I thought the Tapestry was amazing.

Yummmmm! Going to the dairy farm where they make the best ice cream in the whole of Normandy was just the most fabulous thing in the world! We jumped off the coach and met our guide, Sėbastien. He only spoke French so Mrs Stimpfig had to translate. Our guided tour was about to begin. Our first stop was the calves in their cages. They were all so cute, especially the little one that was born yesterday afternoon. Then we saw the young females. They were adorable and gentle. Some of the cows were pregnant and were getting ready to have their babies. There were 150 cows in total and 2 bulls. Sėbastien then explained how the ice cream is made. We then went to the shop to have an ice cream. I chose chocolate and vanilla but there were lots of different flavours. So if you ever need ice cream, go to Normandy, because the ice cream at La Haizerie tastes like heaven.