The programme included adventurous training, team building and leadership training, as well as instruction on training in built up areas (TIBUA) and the Mercury cadet radio system. In total 39 cadets took part in the week’s activities. Congratulations to L/Cpl Grebici; Sgts McFadzen, McDonald, Rule, Szulc, Will, and S/Sgts Perez, Nyam, Miles, Dunleavy, Gregorzek and Siminov on their respective promotions.

Here, cadets report on the week.

The Platoon attack was undeniably fun; however, it was quite tiring. The first phase was preparing for the attack itself. This included: waking up early in the morning, preparing our equipment and planning the attack phase, using the environment around us. The planning was quite detailed and it gave us a good understanding of how to carry out the next phase.  Once the planning phase was out of the way, our platoon commander (Sgt Miles) began to split us into three sections; this meant that the plan came to life as we realised what every section had to do to overcome the enemy positions. For example section one was tasked with covering fire in the first attack, while section two assaulted and section three saved ammo for the second enemy encounter, then the roles rotated for every position, giving every cadet different opportunities to learn and encounter new things on the field.

The first half of the day started with various challenges involving high platforms, leaps of faith, rickety towers of crates and the infamous Jacob’s ladder. The instructors were firm but supportive, and I felt that their reassurance allowed us to face even the most daunting challenge. We completed the challenges along with St. Columba’s School cadets, and we had plenty of competition. In the end though, the day was fantastic, far exceeding my initial expectations. I came away feeling that I had achieved something and learned from my experiences. I would be all too happy to face the challenge again.

As I left the coach I was taken to one side, with a group of my peers. As senior NCOs we are constantly told what needs to be organised, so we were not surprised by this. But instead we were told that we were going to do a leadership course. The task consisted of a massive obstacle course with a variety of tasks inside it. There were ten of us, five from St. Benedict’s and the rest from St. Columba and Durham College. It was very well set up and provided a level of difficulty that I believe only the seniors could have completed. Excellent team bonding experience, I feel like it brought the seniors from the various schools together and it really allowed us to have greater connection during the later stages of the camp.

We started off the day with Dismounted Close Combat Trainer (DCCT) – essentially a large realistic Xbox! We also did clay pigeon shooting with a shotgun in the morning. In groups, we fired rifles powered by carbon dioxide to simulate recoil. Our targets were on a screen at distances of 100 and 200 metres, in both day and night. I really enjoyed the DCCT activity and am quite proud of my aims and score. It was, however, quite tiring because we had to stay in the same prone position on the floor in order to achieve consistent shots on target. Later, we moved onto shotgun firing at clay pigeons. The majority of my group had never fired a shotgun before so it was a very exciting yet different experience as the rifles we usually use to fire were easier to hold. I am also very happy with my shots because I managed to hit nearly all of them.

Next, we moved onto the live firing ranges and so to get our grouping we fired five rounds each at the 100m and 200m marker. Then, with the rest of our rounds we practised our watch and shoot drills which is where the target figures fall down every four seconds. In my group we had a few cadets who had never shot live rounds before so it was very exciting for them and at the end I think everyone was quite happy with their results.

The obstacle course was very interesting and challenging. It consisted of two walls to climb (one 6 foot and one 10 foot), walking across logs which were balanced over ditches and also monkey bars. We were taught beforehand how to get over each obstacle and how to help others. Most people were able to get over the first wall, which was 6ft high. However only a few managed to get over the 10ft wall: most people had to be pushed up this wall because it was too high to jump and cling onto the top. The monkey bars were also too high for some people and so we had to lift them up. The obstacle course was an enjoyable experience and I hope to do something like this again in the future.

The lecture was extremely informative and interested the whole class. First we were told about the different rifles that the German’s had compared to the British, then we were given the opportunity to see and hold the rifles. Finally we were taught about the advances of tactics, technology (e.g. helmets) and weaponry of the German and British army over time. 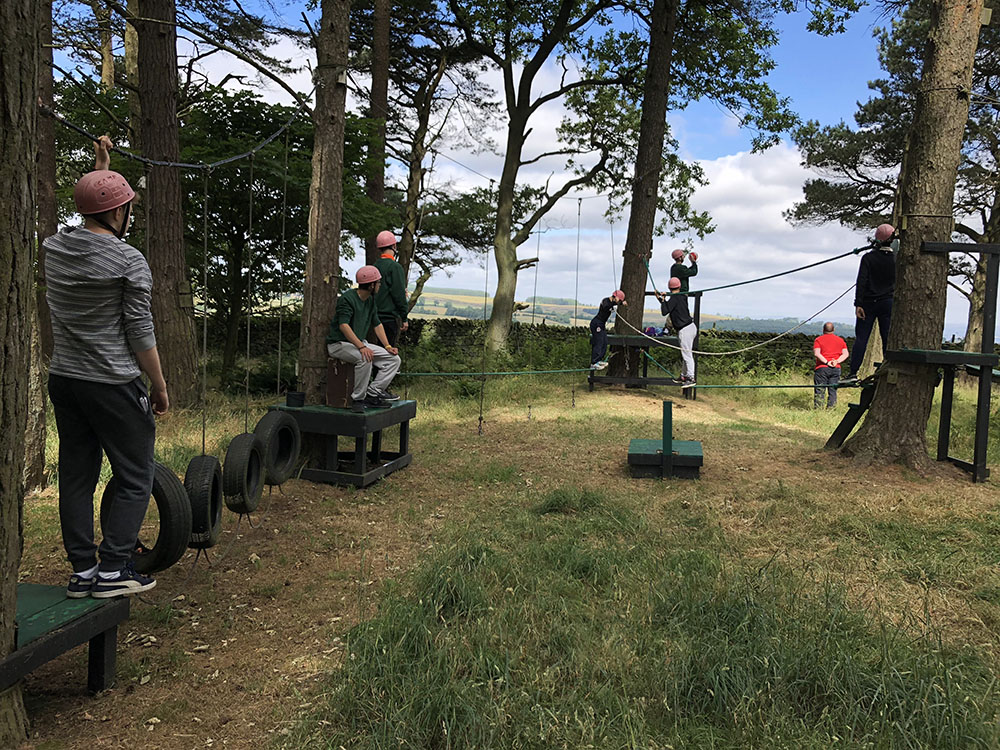 Each stand was very informative, offering valuable information as well as a tough challenge in each activity. Personally, I enjoyed the pair fire manoeuvre because it was very physically challenging, yet offered an informative lesson on how to approach the enemy in pairs. We also practised this technique during the blank firing section attack, where we approached the enemy using the two different types of manoeuvre: leapfrog and caterpillar. The caterpillar technique is when the first man pushes forward, while the other provides covering fire, and then they swap roles. The leapfrog technique is when the first man pushes up and the second provides covering fire. Then, the second man pushes forward, however this time they run past the first man while the first man suppresses the enemy.

TIBUA expanded my current knowledge on fighting in built up areas. For instance, we learnt new drills on how to patrol in an urban environment. Furthermore, the skills necessary to enter and clear out buildings were reinforced. The demonstration of the fully barricaded building provided an enlightening insight into the difficulty in assaulting a defended position and the time necessary to construct and reinforce a defended building.

Sgt Andy Pennock, an expert in his field of communication within the armed forces, led our CCF in an informative and interactive lesson concerning radios and their multiple uses in the context of battle. His humour and emphatic teaching style allowed every cadet to quickly pick up the art of clear conversation and appropriate handling of the equipment while regaling us with stories of his awe-inspiring and action-filled life with the army. Command tasks throughout the day developed our already forming teamwork and leadership skills – in particular, I enjoyed using radios to send runners out around camp to collect messages.

I have enjoyed the leadership days led by the CCF quite a lot - I mainly liked the variety of fun activities across the two days, some being mentally challenging and others being physically challenging. Over the days, I learnt lots of important skills including working with a team, leading a team and various others. I also learnt the core values of the army and what makes/how to be a good leader.

Some of the activities like the Missile Recovery and parts of others, I thought, were a bit too difficult and the lectures could have been shorter - other than that, it was a great experience giving an insight into the leadership element of the CCF.