Dr Huq spoke with St Benedict's students about a range of climate related matters, from the global COP26 climate summit to more local issues such as the controversial low traffic neighbourhood zones and development of high-rises across the Ealing borough. 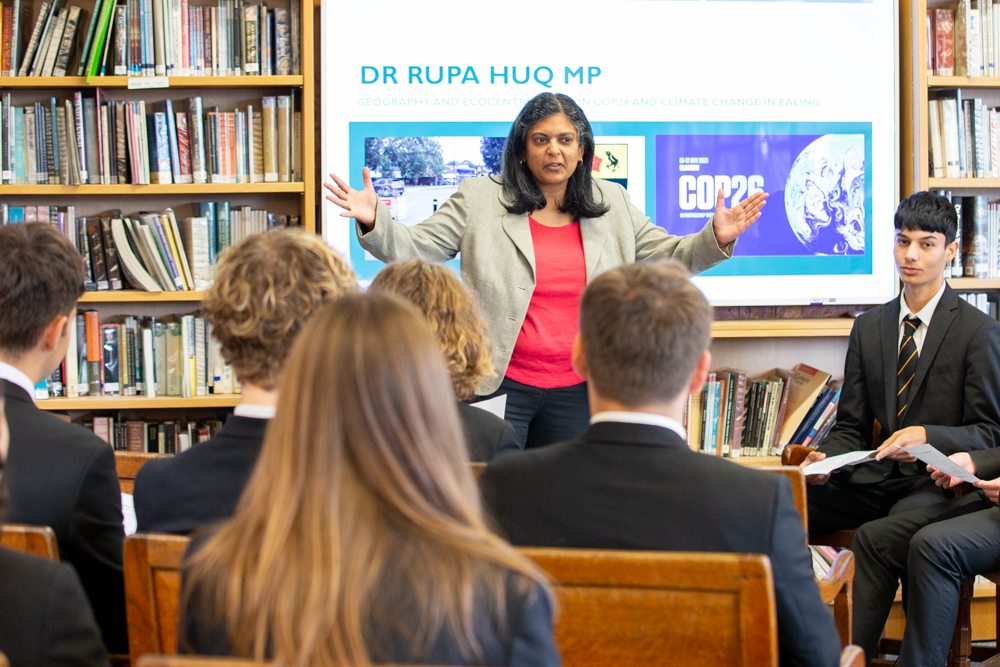 We are already seeing the impacts of climate change: this summer alone terrible floods hit Western Germany, forest fires tore through Turkey, and closer to home, the past month in the UK has seen some of the warmest temperature averages on record. The impacts are already here and if action is not taken, they will get worse. 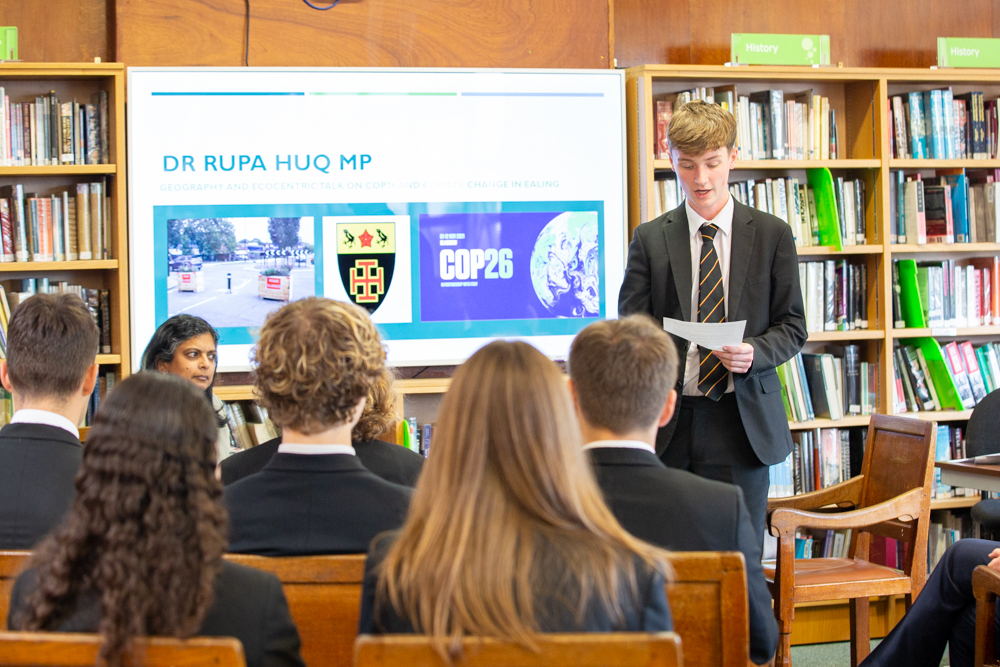 At St Benedict's, climate education is taught across subjects and ages. This week we have taken part in the ‘Be Bold Boris’ petition ahead of COP26, demanding action on climate change. We also invited local MP Dr Rupa Huq to St Benedict’s. 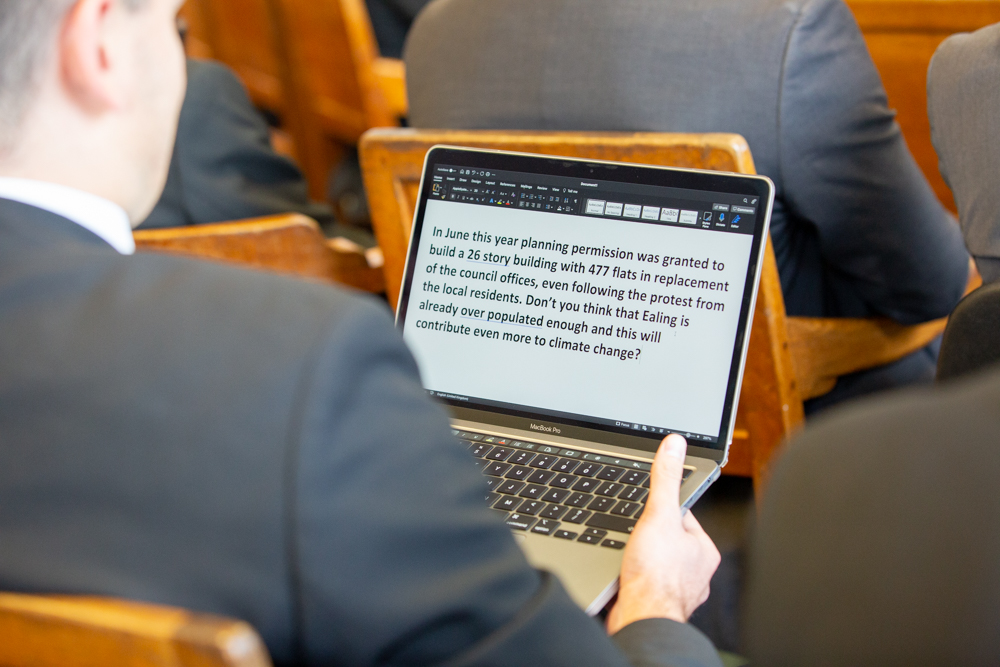 Dr Huq spoke with students about a range of climate related matters, from the global COP26 climate summit that will be hosted in Glasgow this November, to more local issues of the controversial low traffic neighbourhood zones and development of high rises across the Ealing borough. Students from a range of ages attended and questioned Dr Huq on these vital issues. Josh G (U6), for example, asked whether new high-rise developments lead to over population and thereby, over exploitation of resources; and Aoife M (L6) challenged Dr Huq on biodiversity loss through compulsory purchase schemes associated with HS2. The talk was run by two students in the U6, Jake B (Geography) and Adam G (Politics), who welcomed Dr Huq to the school, acted as question masters and also posed some critical questions themselves. 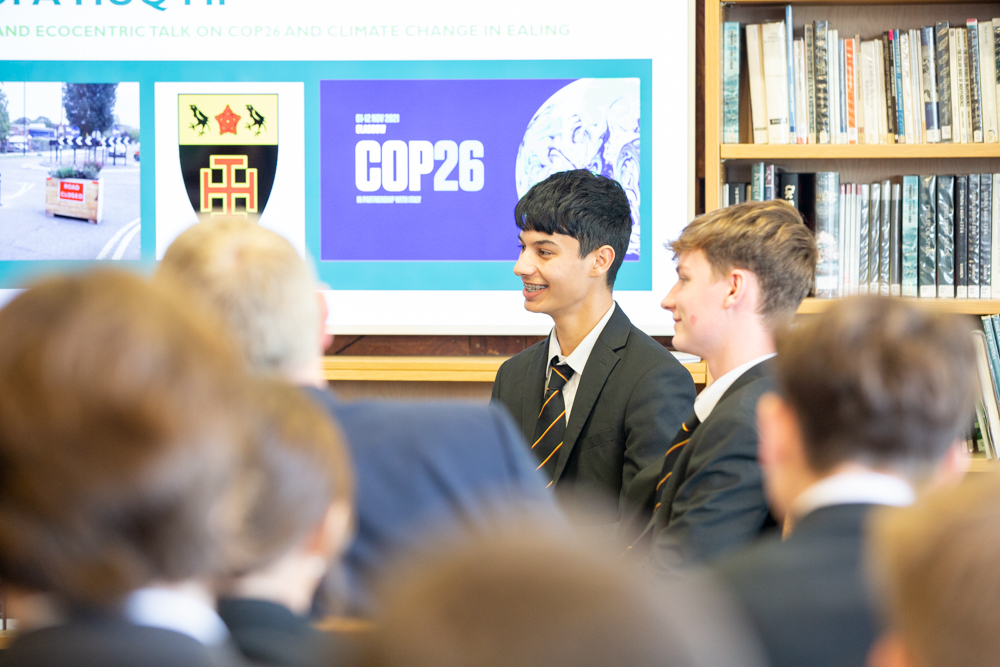 "It was interesting to hear an insider's perspective of Labour party aims and the governments’ response to climate change in general." - Anna-Maria S (U6).

"I enjoyed listening to Dr Huq’s opinion on both the benefits of HS2 and the problems that come with it."- Isabel M B (U6).

During Dr Huq's talk and questions and answers, one of the most interesting points in terms of political significance was that of the role of local politics and councils, and also Sadiq Khan’s role as Mayor of London. Dr Huq spoke of how budgeting was assigned to councils in constituencies and that central government had a key role in allocating budgets as well as the Mayor. I learnt that in fact, local environmental policies and actions from councils were often not of their own wish or agenda, but thrust upon them by more dominant figures in politics. One clear example of this as listed by Dr Huq was that of LTN barriers imposed upon Ealing by Ealing Council, which received huge backlash from constituents for the counter-intuitive nature of the barricades in preventing traffic and the inconvenience they caused on a daily basis. From Dr Huq's talk it became apparent to me and other Politics students that perhaps it was not only Ealing Council to blame. Funding from central government and the Mayor for 'cycle lanes' was given at such a time that making full and efficient use of the money in creating safe and separate cycle lanes to reduce air pollution was near impossible and this was the fastest and most effective alternative to spending the budget. The fact that other branches of politics are able to have such an impact on local politics in constituencies they did not govern clearly demonstrated the teamwork and bipartisanship it will take between both political parties and branches of government for the climate crisis to be solved. Cooperation and compromise being critical to taking the next steps forward in reducing the UK's carbon footprint was a lesson taught to us by Dr Huq, and one we all can appreciate and value, as the good of the planet should come before our political differences.

With the opportunity to speak to an MP who has a voice in how the government and her constituency should deal with climate change, I wanted to ask compelling questions. The first question that I asked was ‘What would you do differently from the current government in terms of climate change?’. For the answer to this question, I received a very intricate response, with Dr Huq referring to Labour’s ‘Green New Deal’ and talking about the need of creating ‘green jobs. Next, I asked the question raised by a member of our very own Eco-Centric Club, Charlie E in Year 7: ‘What can we do as individuals to reduce climate change?’. I received a very well-thought-out answer about reducing our meat consumption and how we shouldn’t pass the blame onto major powerhouse countries and TNCs (transnational corporations). Rather, that if we as individuals make an effort in reducing our carbon footprint this would lead to  a huge difference to the problem of climate change, with Dr Huq referring to the quote of ‘little drops of water make a mighty ocean'.