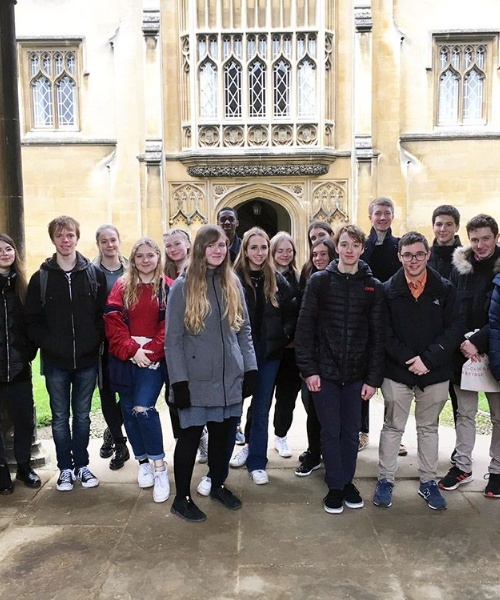 Some of our prospective Oxbridge candidates visited Jesus College, Cambridge - for a bespoke tour from a former St Benedict's student who is an undergraduate at the university.

Phoebe Lawes and Duncan Ashby share their impressions of the day:

First, we received a talk from Olivia, a woman who had been to, and worked in, both Cambridge and Oxford universities. She gave a brief explanation regarding the collegiate system at Oxbridge and then gave us information on the logistics of the admissions process. Then, we were given the opportunity to speak to ambassadors who actually went to the university. They were able to give a first-hand insight into the interview experience. Their enthusiasm for their subjects and their love of the university was palpable and very motivating.

Next, the ambassadors took us on a tour of Jesus College; from the magnificent library, to the gym, to the common rooms, to the beautiful courtyards, the college impressed everyone. We were additionally given the opportunity to ask the ambassadors any questions, which really helped us picture real life at the college.

After lunch, we met up with Aine - an ex-St Benedict’s pupil studying natural sciences at Cambridge. It was incredibly encouraging for all of us to see one of our own, thriving in such an exciting place to study; I personally found it gave me more of a drive to try for Oxbridge myself. She - along with her friend who was studying medicine - took us on a tour of Magdalene College and gave us a brief look at St John’s and Trinity. For our group especially, which contained at least 7 medicine hopefuls, speaking to someone who actually studies the course there was very helpful for them.

At the end of the day we had just enough time to visit a short exhibition on women at Cambridge that revealed some rather shocking facts; for example women couldn’t get a degree from Cambridge until 1948! At the end of the trip, the general feeling amongst the group was one of inspiration and excitement for the future.

A number of us in (Lower 6th (year 12) were lucky enough to go on a day trip to Jesus College, Cambridge. After a warm welcome there was a short introduction to the application process and an explanation of the roles of the different courses and colleges within Cambridge. Some current students gave us all a brief tour of the college, including some the accommodation and libraries and working areas. We then met up with Aine McColgan (an ex-student at St Benedict’s who now attends Fitzwilliam College), and another student who attends Magdalene, who had both kindly agreed to give us a tour of the town of Cambridge and some of the other colleges, such as St John’s. Overall it was a very fun and eventful trip, and also helpful in learning about the application process and what’s expected of a student who attends one of the top universities in the country.