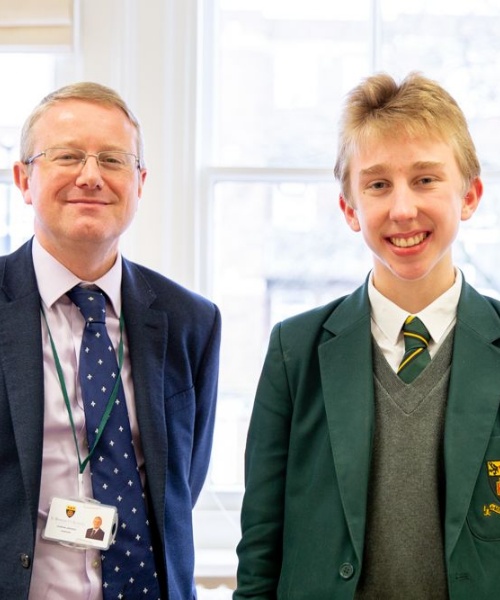 James Hunter, a student in year 11 at St Benedict’s, has won First Prize in the Arts Richmond Young Writers’ Festival.

James was one of 24 finalists selected out of over 600 entries to this annual competition, which was launched back in September. The writers' work was performed by actors at the Exchange Theatre in Twickenham on Sunday March 15th and James came first in the Year 10 and above age group. He has been appointed Laureate for Richmond Borough and will be writing stage reviews and other articles for borough publications.

James wrote about a severe car accident he experienced as a young child, in his poem, Car Crash: “When you write about something like this you give away part of yourself for scrutiny", he said, "but the actors took it and created something beautiful. They really did it justice.”

Headmaster of St Benedict’s, Andrew Johnson, said: “I congratulate James on this impressive achievement. He is clearly an extremely talented young writer, who has written with great honesty, courage and sensitivity about something profoundly traumatic.”

Deafening crash and all is silent momentarily as

His head lolls lifelessly to one side.

A face contorted with fervid grief is screaming, screaming his name,

But his eyes dart around, his mouth opens

Wide to scream, all his words are blood.

The taste is sharp on his tongue, but his brain is

Then the pain pierces through, intense and

Nauseating, and the knots of his brain, my brain unravel…

I call out to the silent air, to pall me in darkness,

In thick, numbing fog – to constrict me in its coils ‘til

I can’t think, can’t breathe. But life weighs heavily on

They brace me, strap me – inject the miracle boy to

Halt the truck that ploughs through my dreams, to

Dull my nerves that shriek at every sound.

Until the memory is melted, softened and

Flows like honey to fill up the crater in

The car – to sweeten the taste of blood.

But the sound of forty tonnes of tanker, still

Roars in my ears and dances in the corners of my mind.

And every time I lie down on my bed, I feel the tarmac

Of the motorway scraping against my back.