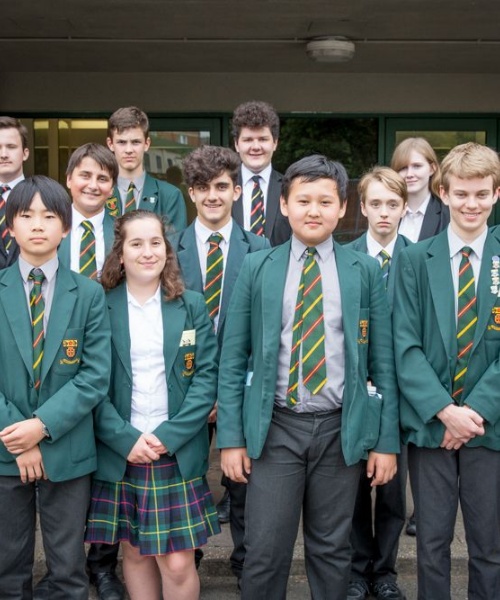 St Benedict’s pupils have excelled in the UK Mathematics Trust Challenges  - tests of mathematical reasoning and mental agility aimed at the top third of students in the country.

UKMT challenges attract over 600,000 participants from more than 4,500 schools with only a very small percentage being invited through to subsequent Olympiad events.

Gold Certificates were awarded to three Upper Sixth (Year 13) students: Lukasz Podgorski, Parsa Sarkis and Aine McColgan, who were also invited to take part in the next round of the competition – the Olympiad.

Aran Husni, Arun Moore, Oscar Jones, Nicolas McKenna and Niall Wynne were invited to take part in the Olympiad, in March and did extremely well. Congratulations in particular go to Niall Wynne who was awarded the coveted Merit Certificate.

Jules Dehon (Lower 6/Year 12)  has been invited to attend the UK Mathematics Trust Royal Institution Mathematics Masterclass Celebration Day in London in July. Jules achieved the best score in the UKMT’s Senior Maths Challenge in Year 12 at St Benedict’s last November. The event will be held at the Royal Institution, with talks from popular mathematicians on exciting areas of mathematics as well as a range of stimulating and challenging maths activities.

Phoebe Daly-Jones and Max Lubowiecki (Lower 6/Year 12) were invited to attend a series of Royal Institution Mathematics Masterclasses earlier this year, in recognition of their achievement in the Senior Maths Challenge last November. RI Masterclasses encourage young people to broaden their engagement with STEM through series of hands-on and interactive extracurricular. Across the series students heard from different speakers from industry and academia and were able to explore a variety of topics in real depth, allowing them to experience the wonders and applications of Mathematics.

In Upper 4/Year 9, Niall Wynne and Jin Tao Wang have been invited to the Royal Institution’s Mathematics Masterclass Day in London, following their high achievement in the Intermediate Maths Challenge in February.

In Lower 5/Year 10, Arun Moore and Aran Husni have been invited to attend a prestigious UKMT Hammersmith Maths Circle event in June, in recognition of their achievement in the Intermediate Maths Challenge and follow-on round in February and March. The event will introduce the students to new mathematical ideas and concepts, inspiring their mathematical thinking.