St Benedict’s Combined Cadet Force has had a tremendous start to the academic year, with a high number of new recruits and two successful training exercises.

Of this year’s 46 Year 9 new cadets, 43 attended Exercise Recruits Dawn: recruits spent a day and night at St Martin’s Plain Military Training Camp in Folkstone, Kent, learning the basics of drill, skill-at-arms, and military knowledge, and familiarised themselves with the obstacle course. 10 Junior NCOs also attended, and developed their leadership and instructional skills.

The aim of the CCF is to develop transferable skills and qualities which will be useful in later life. These include leadership, responsibility, self-confidence, initiative, perseverance and team work.

Over the same weekend, cadets with at least one year's experience took part in Exercise Bayonet Point, also at St Martin’s. Cadets had the opportunity to develop their fieldcraft and patrolling skills, laying the foundations for Section and Troop level leadership. 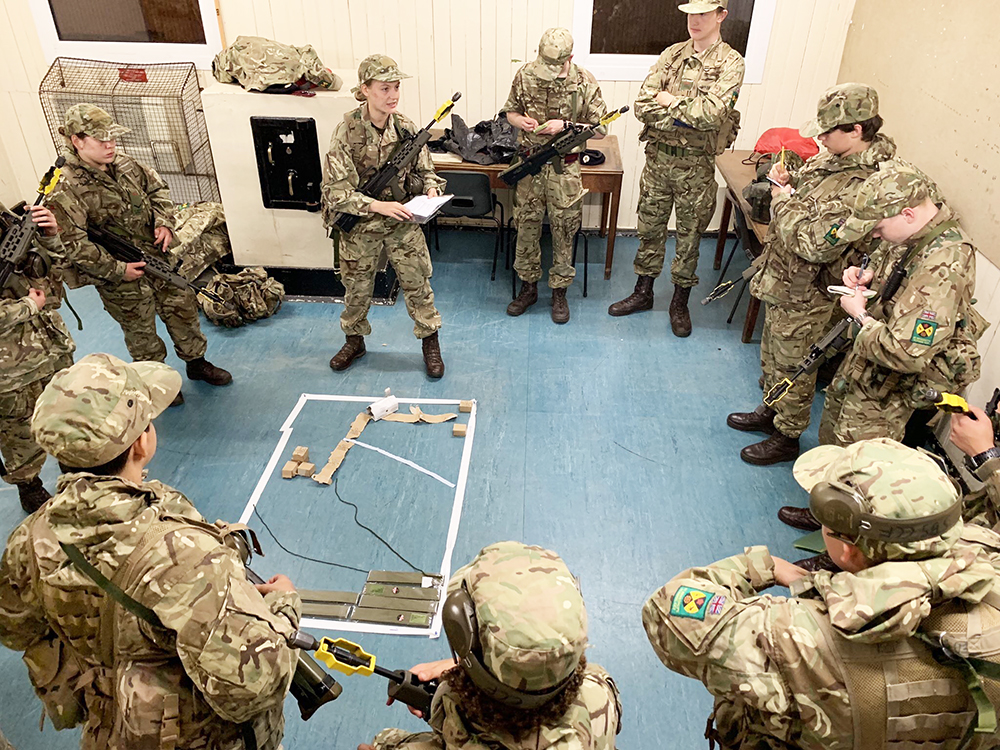 The aim of the CCF is to develop transferable skills and qualities which will be useful in later life. These include leadership, responsibility, self-confidence, initiative, perseverance and team work.

Activities incorporate varied and interesting training with a military bias: training may include shooting, military exercises, outdoor pursuits, personal development exercises, obstacle courses, and visits to Regular Army units. While all of this provides background knowledge of the British Army, there is no expectation that a cadet who joins the CCF will  join the Armed Services.

This camp was the new recruits’ first glimpse into the CCF experience and greatly expanded their military skills and knowledge. Sunday started with getting the recruits settled into their blocks and accustoming them to the strict military lifestyle and self discipline needed in the CCF. Initially the recruits struggled with keeping to the demanding time frames, yet as the camp progressed their efficiency and self reliance greatly improved. 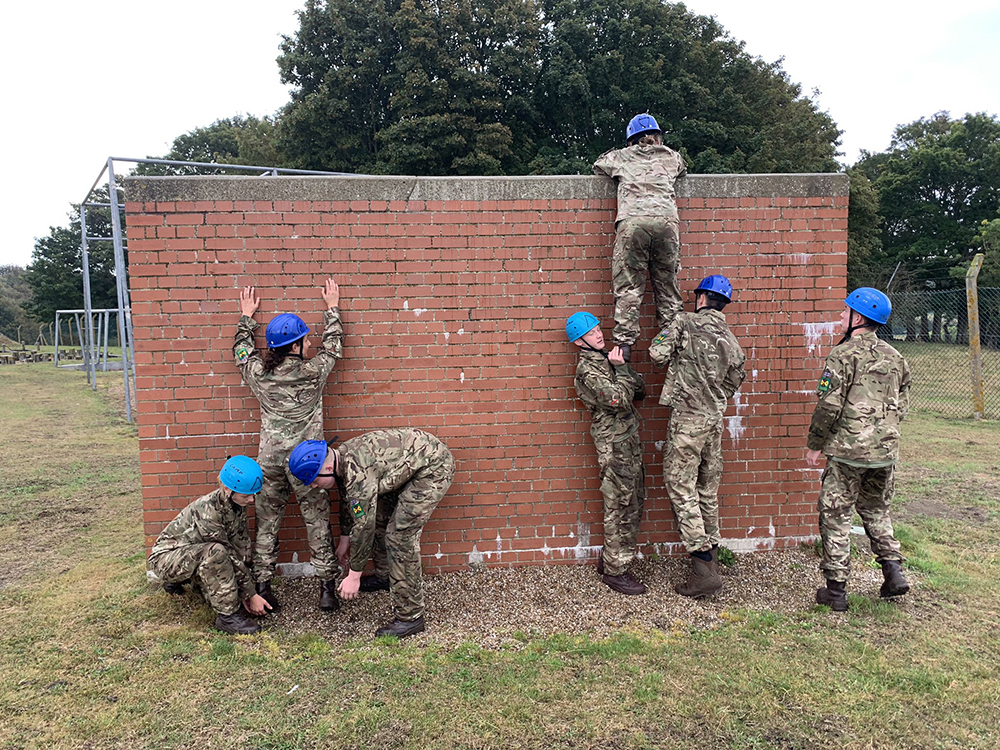 One of the most exciting activities on Sunday was the assault course, which gave recruits the opportunity to challenge and stretch themselves in ways they couldn’t previously. In addition, the recruits were taught how to construct bashas, necessary to survive in a field environment, along with duties of a sentry which taught them how to defend the platoon harbour with dedicated sentry positions. 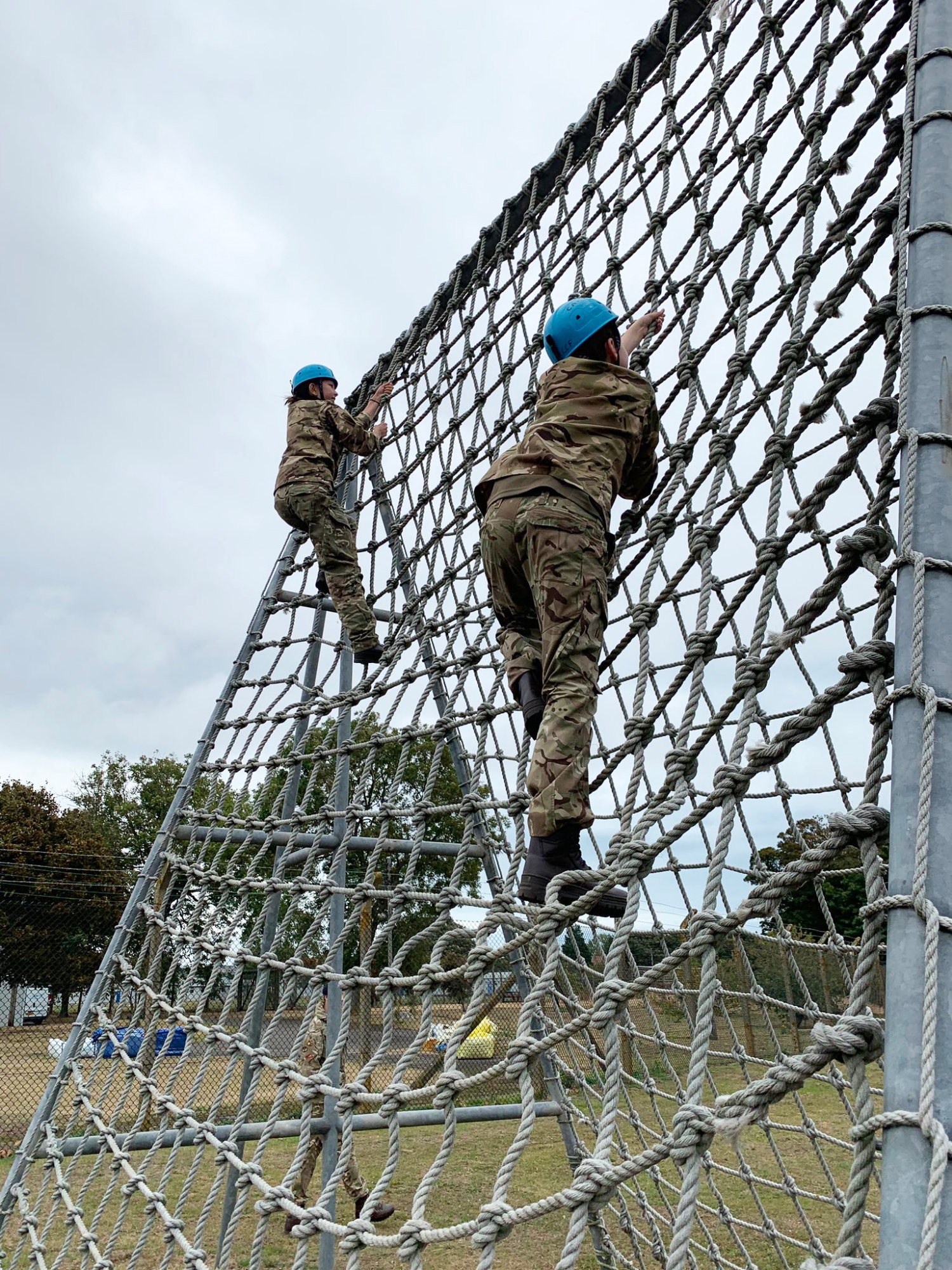 The real challenge came on Monday when sections went out on a patrol, learning how to safely navigate the terrain and ensure the area is safe from enemy. Manoeuvring techniques include single file, extended line, and arrow head formation. The section patrols were followed by lessons taught by section on how to attack an enemy position with RTR principles and scan the terrain for objects using special identification techniques. Other lessons included why things are seen which demonstrated how to effectively stay hidden from an enemy. 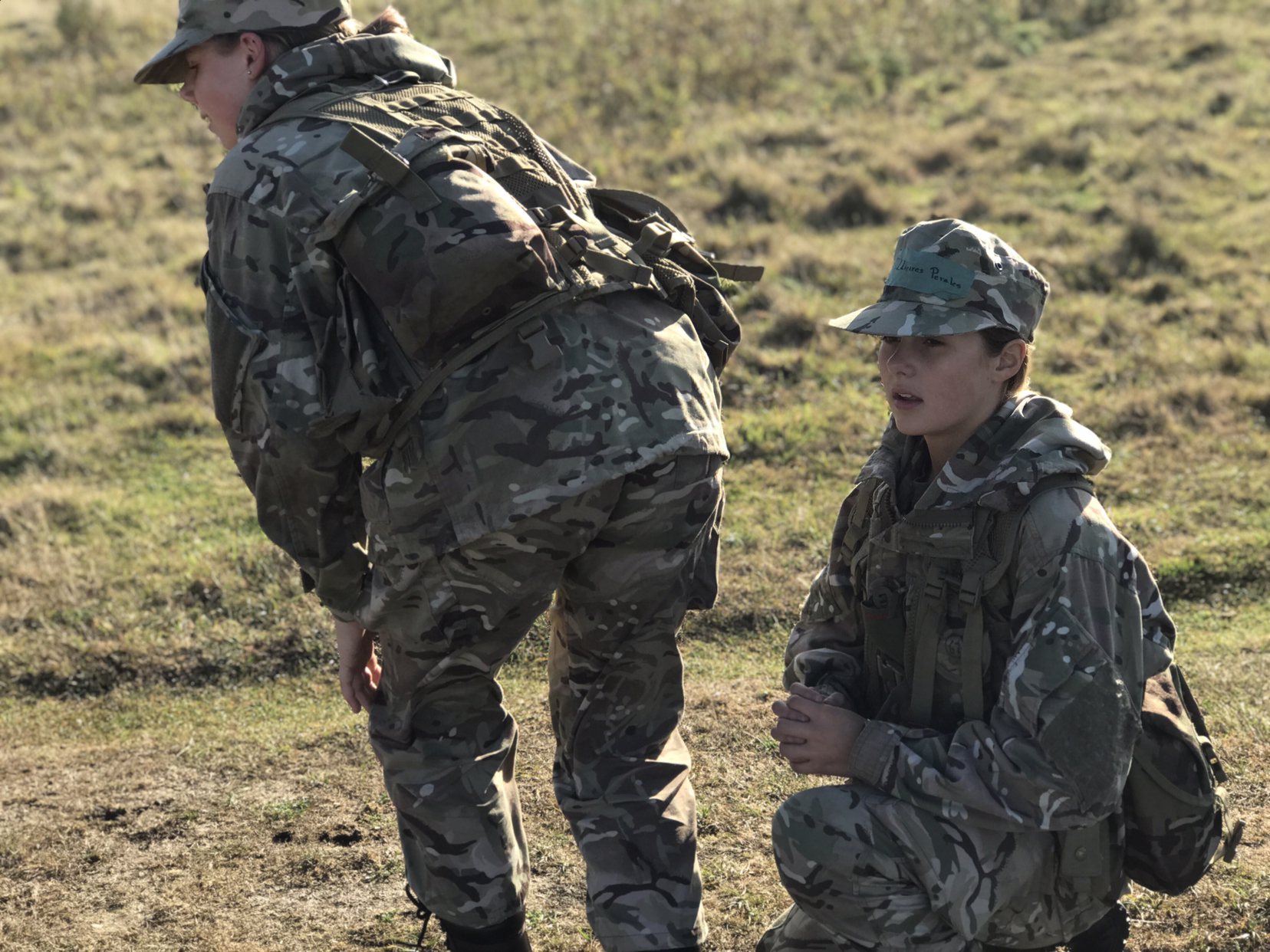 The recruits really loved this weekend away and the older NCO cadets loved watching the recruits begin to develop and grow even over such a small amount of time. Some quotes from the recruits which illustrate how much they loved Exercise Recruits Dawn:

After school on Friday 20th September, a group of sixteen senior cadets embarked on our exercise, Bayonet Point. Aimed at cadets with at least one year of experience, we knew we were in for a challenging weekend, and we were ready for anything that could face us.

Morning came, and weary faces rolled out of our bashas - but with the drive and determination we develop and cherish in the CCF, we pulled ourselves together for a day of obstacles to overcome and pressures to thrive under."

By the time we arrived at St Martin’s Plain Military Training Camp, the sun had already set and darkness was upon us. After a quick briefing with our platoon commander, SSM McFadzean, and our platoon sergeant, Sgt Rule, we began our midnight trek to our base for the night. Our mission: to disable all offensive actions of the Climate Change Protesters Militant Faction.

With moonlight guiding our way, we traversed across heathland before entering the Pariker Forest, where we suspected the Militant Faction was moving explosives with the intent of blowing up the Eurostar. As soon as we got into the forest, we doubled back for a snap ambush - watching the path behind us to ensure we weren’t being followed by the enemy. Then, in the pitch darkness, we travelled to our base, sending out our reconnaissance patrol ahead to ensure our location was safe. By the time we’d finally bed down, it was 0130hrs! With only a few hours left before reveille (wake-up), everyone rushed to bed, except for the unlucky ones stuck with the first shift of sentry duty.

Morning came, and weary faces rolled out of our bashas - but with the drive and determination we develop and cherish in the CCF, we pulled ourselves together for a day of obstacles to overcome and pressures to thrive under.

All of the cadets applied their advanced knowledge of field and assaulting techniques during a number of platoon attacks on Saturday. With Cpl Cuss and LCpl Pink as our section leaders, we began patrolling back to camp. Suddenly, we were contacted by the enemy, and, like well-oiled machines, we fluidly transitioned into our battle tactics. Using radio signals, we smoothly coordinated flanking sections, fire support and fight throughs.

At first, we couldn’t spot the enemy attacking us, so we sent our flanking section up the slope of the valley to get to high ground and spot the enemy before fighting through. Once we’d disabled the enemy, we continued our patrol. Not ten seconds after we’d left, we came under contact again. Already in the battle mindset, we quickly fought through the militant factions’ position. However, we were beginning to run low on ammunition. We redistributed the ammunition, hoping that we weren’t contacted again. Luck was not on our side because as we reached the hilltop, we were attacked a third time. Radio signal was weakened and the fire support ran out of ammunition far too early. Yet, using our perseverance, the fighting group pushed through and disabled the final enemy location in a well-defended pill box.

This gave us an excellent scenario to put our skills to the test with real enemies and a challenging environment. Furthermore, it allowed us to develop our battlefield and leadership abilities with cadets being trained into higher levels of responsibility and control.

After a powerful take to the platoon attack, the experienced cadets were able to dig in to warm rations for lunch. They then cleaned their personal weapons with extreme amounts of care, showing the level of their own high standards now that they are well practised cadets in the CCF.

The weekend was a huge success, developing our personal and team skills, and improving our tactics and fluidity as a platoon. Older cadets honed their leadership skills and ability to adapt to suit a situation, and younger cadets learned a huge range of new manoeuvres and how to execute them most efficiently.

For many years St Benedict’s School CCF has accepted recruits from the Cardinal Wiseman School in Greenford, as part of the government’s on-going project to introduce CCFs in as many maintained sector schools as possible. Pupils from both schools are treated equally and without distinction; two cadet heads of CCF in the past six years have been Cardinal Wiseman students, and our highest Cadet award, the Conabor Sword, has been awarded to Cardinal Wiseman cadets twice out of five times.