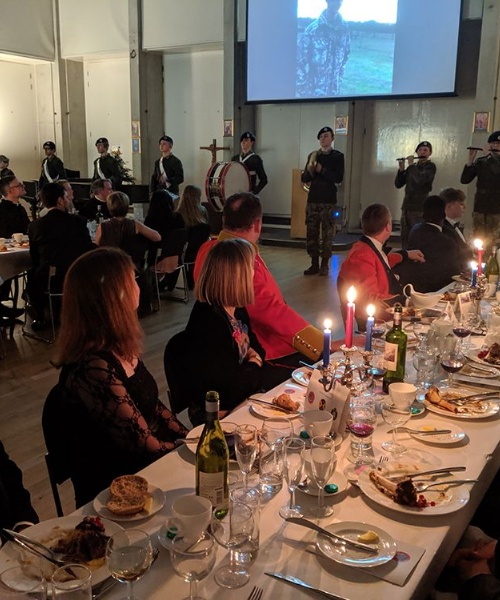 St Benedict's cadets, parents, staff, alumni and serving officers came together to celebrate the 90th anniversary of the formation of the CCF. 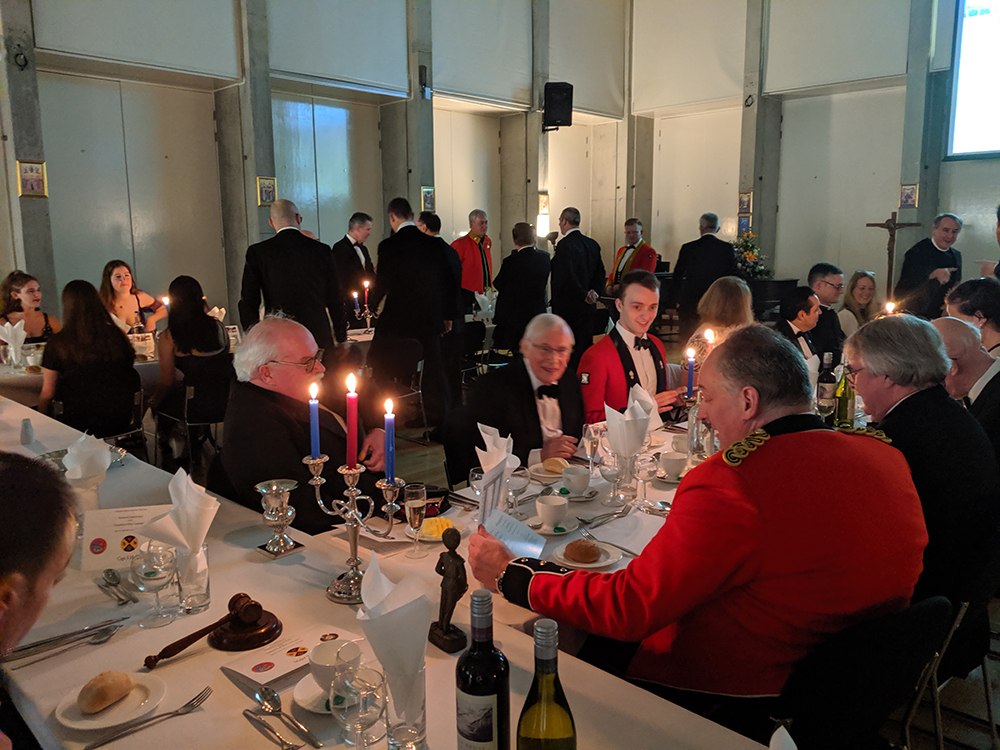 CCF90: A Dinner to Celebrate Ninety Years since the Foundation of St Benedict’s School CCF (24th January 1930 to 24th January 2020)

In January 2015 we held a very successful Mass and reception to mark the 85th anniversary of the formation of the CCF in 1930; this year we decided to mark the 90th by resurrecting the annual CCF Dinner and inviting anyone connected with the CCF to attend. We were overwhelmed by the response, and sixty of us sat down to dinner in the Cloisters on the anniversary. We had been summoned to take our seats by the superb bugle-call of LCpl Shan Arden (Cardinal Wiseman). 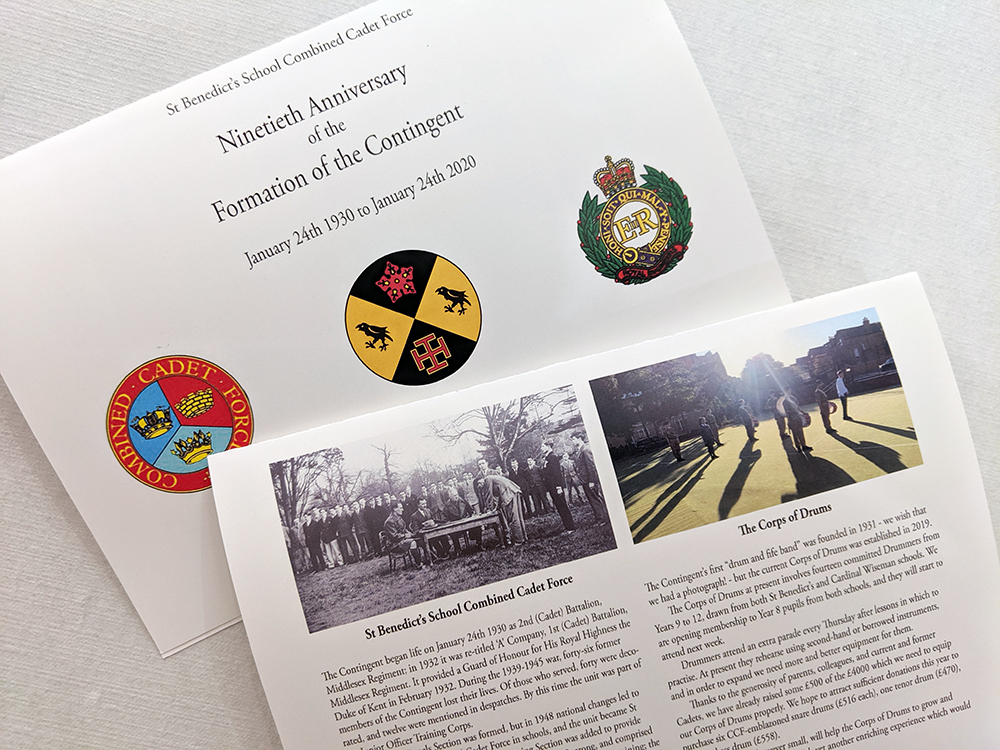 To my mind, the Cloisters have never looked better: our E-shaped table filled the space without being cramped; the lights were low; blue-red-blue candles were burning in silver holders on the white tablecloths; Dmrs Erika and Cara Abano (from Cardinal Wiseman) were playing the grand piano softly; and a slide-show of two hundred select images of CCF life from 1930 to the current day ran on a loop on the projector screen throughout. Our guests included many serving and former officers, resplendent in their scarlet Mess Dress, which undoubtedly added tone. 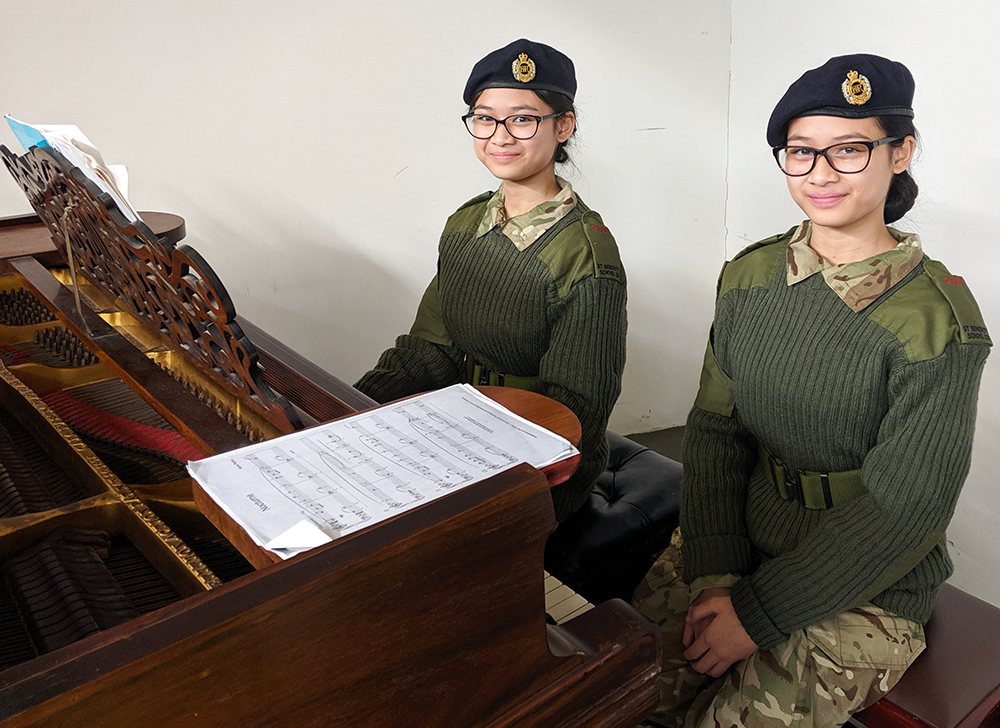 The atmosphere around the Combined Cadet Force is electric, and feels like it is heading in a very healthy direction.” (Major Tom Foote RE)

Our Contingent began life as 2nd (Cadet) Battalion, Middlesex Regiment; in 1932 it was re-titled ‘A’ Company, 1st (Cadet) Battalion, Middlesex Regiment. It provided a Guard of Honour for His Royal Highness the Duke of Kent in February 1932. During the 1939-1945 war, forty-six former members of the Contingent lost their lives. Of those who served, forty were decorated, and twelve were mentioned in despatches.

In 1946 a Signals Section was formed, but in 1948 national changes led to the creation of the Combined Cadet Force in schools, and the unit became St Benedict’s School CCF. In 1957 an Engineering Section was added to provide training after “Cert A”. By 1960 the Contingent was 252 strong, and comprised HQ, A, B & C companies, all Cadets receiving Signals and First Aid training; the formation of a Civil Defence Section had been announced. It appears that the Contingent had been affiliated to the Royal Irish Rifles, but at some later point it was badged Irish Guards. Another re-badging to the Royal Engineers came in 2006.

As of January 2020, our entirely voluntary CCF looks after some 100 male and female Cadets from two schools - Cardinal Wiseman and St Benedict’s. It is divided into Ward (HQ) Troop, Casey Troop (Year 11), Wilding Troop (Year 10), and Teeling Troop (Year 9), all named after war dead of both schools.

Once Mr Johnson - officially the CCF’s Commanding Officer, and a former CCF officer - had welcomed our guests and invited Fr Alexander to say Grace, our first course was brought in by uniformed Cadets. Nine of our Year 12 NCOs had volunteered to act as waiting staff for the evening, and carried off their role elegantly in their smart No2 dress. 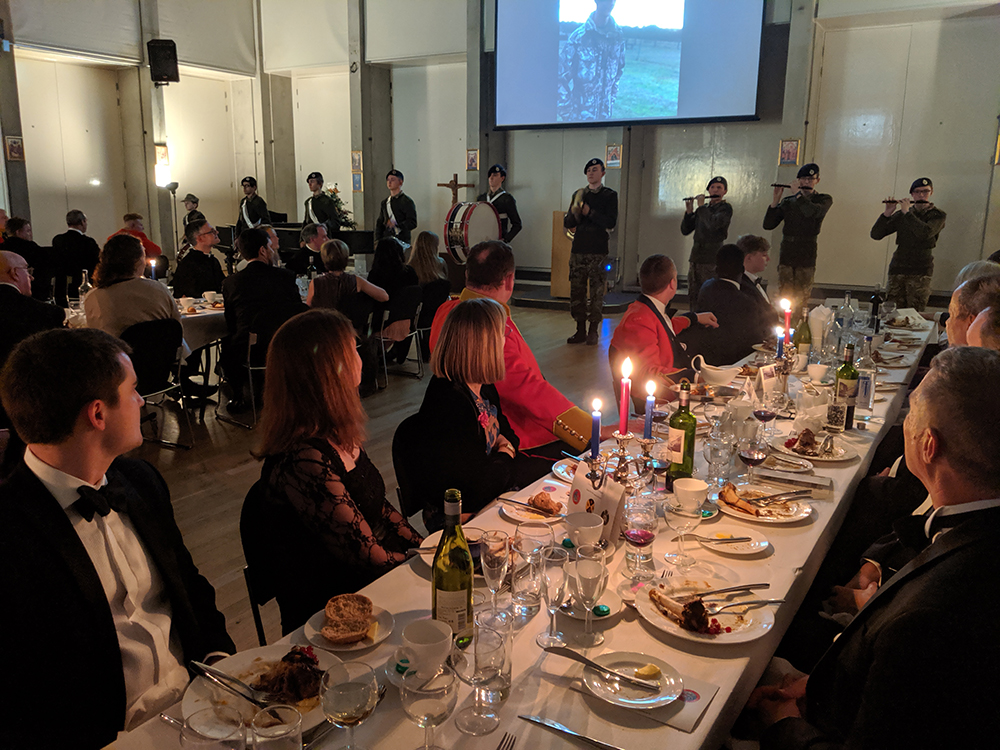 After the main course was finished, the Corps of Drums entered the Cloisters under the direction of Dmr Ben Dovey, and performed a medley of tunes, my favourite being The Great Escape. Their wonderful sound filled the space, their drill looked immaculate, and before they had even finished marching out the Deputy Lieutenant had booked them for the Ealing Remembrance Day parade. It was hard to believe that they had only been in training since September.

Considering their limited experience in performing they handled the pressure of the occasion superbly. I congratulated them in person afterwards, where I found a joyous group of Cadets who were rightly pleased with their achievement.” (Major Tom Foote)

The brief recess to “Ease Springs” allowed the tables to be cleared of spent brass and re-loaded with dessert, cheese, and port. When coffee had been served, Cdt SSM Emilia McFadzean proposed the Loyal Toast, Capt Spivey a toast to the Royal Engineers, and Mr Johnson a toast to St Benedict’s School Combined Cadet Force. Presentations were made to Sgt Instr David Cuss and Capt Spivey, both of whom leave the CCF this year, before Major Foote spoke about the great value of Cadet service to individual Cadets, their communities, the Armed Forces, and British society. The speech was elegant, humble, intelligent, and well received. Major Foote concluded by proposing a toast to the Next 90 Years, reminding us that we are just one stage in our Contingent’s history.

I hope that you, and the whole CCF, is as proud of your affiliation to the Corps of Royal Engineers as we are with our affiliation with you, and all the Cadet units around the country.  You are as much a part of the Corps family as any member of the Reserve, Regular, or Retired community.” (Major Tom Foote)

As guests began to make their farewells, it became clear that many were unwilling to leave - always a good sign. The atmosphere had been just right from the very start, and the general feeling was of celebration and happy memories:

Thank you for such a fantastic evening last night. From the conscripted waiters, to the entertainment, the recent leavers, and the old boys, everyone had a story to tell, and all were proud to be part of the School CCF.”

It felt very strange being back at school so soon, but I’m glad I took the opportunity to attend.”

The Cadets who served us during the evening were also brilliant, and it is reassuring that you have developed a culture where they volunteered to do such a duty.” (Major Tom Foote)

Our thanks go to the wonderful catering team who made it all possible, and to the Year 12 NCOs (Cpl David Giordmaina, Cpl Ayman Grebici, Cpl Mariana Makarewicz, LCpl Milly McCosker, Cpl Marta Mucko, Cpl George Reed, Cpl Danny O’Sullivan, LCpl Amy Vaughan, and Cpl Jamie White). We were startled to hear them singing “Happy Birthday” at the end; it turned out that Cpl Mucko had given up the evening of her birthday to serve at the dinner!

I was fascinated, when talking to a variety of guests, particularly the parents, that their knowledge of the CCF varied so greatly. The dinner was a great opportunity to inform everybody about what the CCF is about and what your Cadets are up to. When talking to the same parents at the end of the night it was clear that had been achieved.” (Major Tom Foote)

Just as our CCF is honoured to be part of the Sapper family, we hope that all those who serve or have served with the Contingent in any capacity, as well as the parents who encourage their children’s participation, know that you will always be a part of the St Benedict’s School CCF family. We look forward to seeing many more of you at our Centenary celebrations on Thursday January 24th 2030.