CCF Cadets travelled to the Mendip Outdoor Pursuits centre in the Mendip Hills for three days of adventurous training - including caving, abseiling and kayaking  -  over half-term. 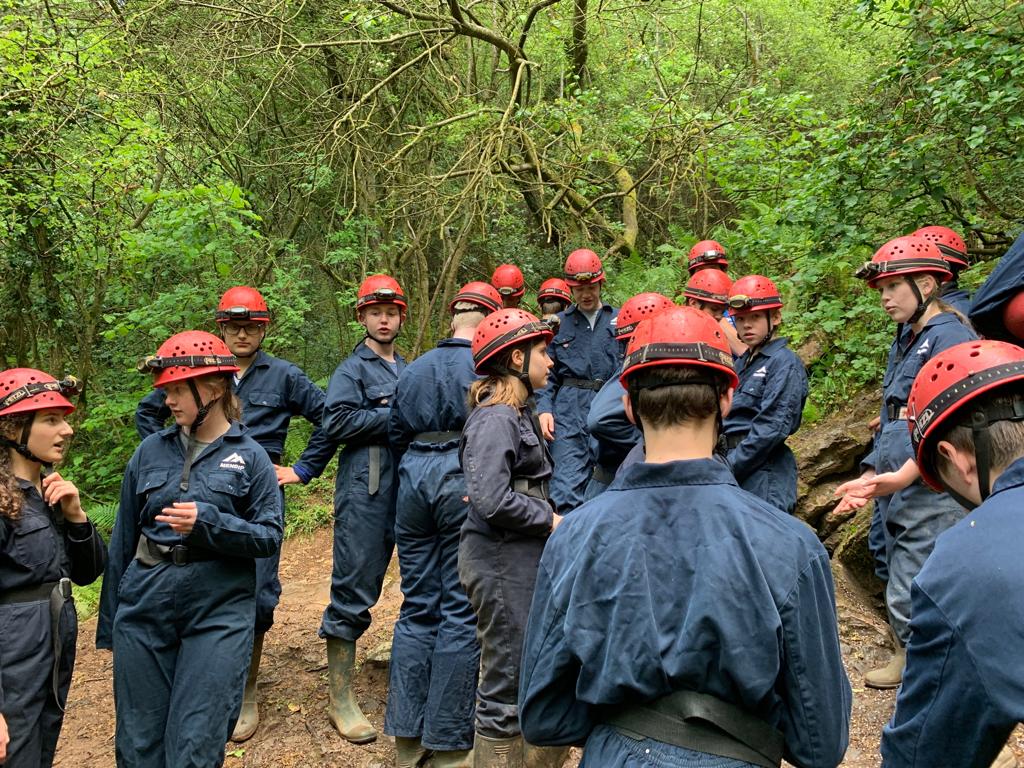 To give adventurous training a boost, St Benedict’s CCF have added a May half-term camp to their calendar of events. Twenty-three Cadets travelled to the Mendip Outdoor Pursuits centre in the Mendip Hills for three days of “challenging pursuits” (as the Army prefers to call it).

The centre has a permanent team of instructors, who very soon knew our Cadets’ names, strengths, and weaknesses.

All the centre’s staff were very helpful and really helped make the potentially difficult activities a bit easier; they took their time explaining things.

One of the aims of the camp was to include as many different activities as possible, so that even if a Cadet did not enjoy one, there would be something else which worked for them.

The schedule was well thought-out, as it allowed lots of time for hands-on intense activities.... It was fun as I hadn’t done most of the activities before.

Everyone threw themselves at the unfamiliar and overcame their personal fears and misgivings. (The only exception was Capt Hullis, who is happy to admit that the Cadets are far braver than he is.) 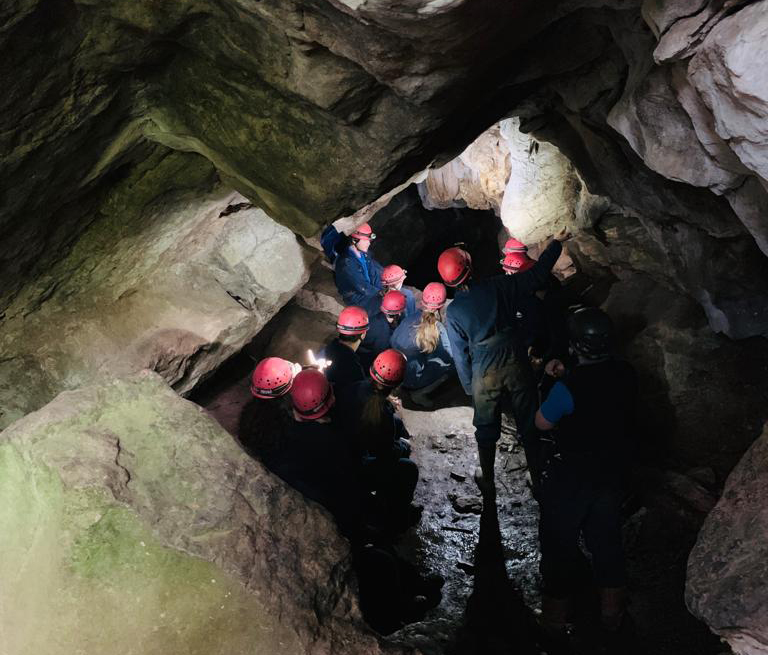 Within an hour of arriving, the Cadets, SI Cuss, and Miss Watson were being kitted up in helmets, overalls, and wellies, for caving in Goatchurch Cavern.

We all found the caving very enjoyable and also a good learning experience. The instructors explained how the caves were formed and the interesting history behind them. The actual caving itself was quite challenging, with a lot of climbing, sliding, and squeezing... I loved it - such a great experience, and I had a very funny time with my fellow Cadets.

We were the first group to use the centre’s new lodge accommodation, a former hotel and a far cry from most CCF camps. The bedrooms had just been converted into small bunk-rooms, with space for six people and each with an en suite shower room. Multiple USB chargers meant that fights for sockets were at an end, and there was free Wi-Fi. Small things, but they made life much more pleasant. Downstairs there was a huge amount of communal space, and the food cooked in the building was served cheerfully and plentifully. 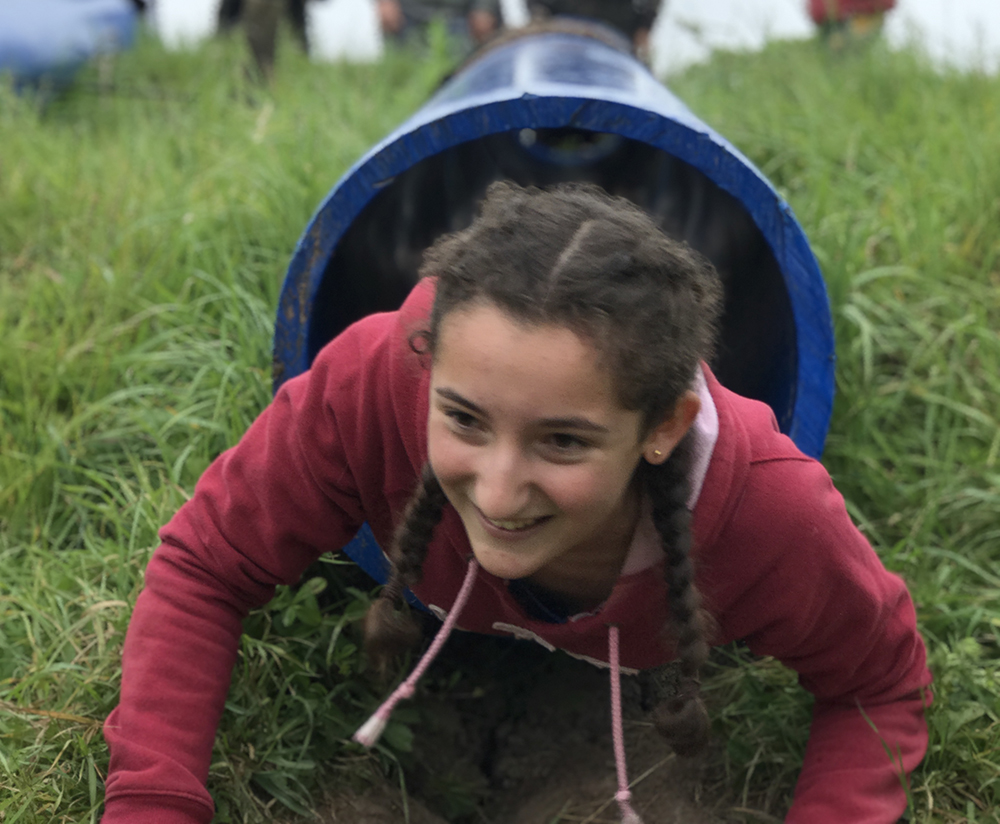 We drove out to the centre’s site at Hewish, for kayaking and an obstacle course. The course had a lot more mud and water obstacles and nothing at height – but we used it as part of the camp competition and the Cadets threw themselves into it, sometimes literally.

We got off to a good start with a very enjoyable obstacle course - a way to increase our teamwork and skills, and also to improve our physical fitness. Although the weather wasn’t the best, we managed to keep our spirits and morale up by making the most of what we had. Towards the end, the activities involved crawling and diving into mud-filled puddles; this was very uncomfortable, but we found humour in the cold.... It was really fun when everyone jumped into the puddle of mud and ran through it. Although we got very wet and muddy, it was worth it!

Of course, it was not everyone’s cup of tea:

“I enjoyed the obstacle course as it was able to build up our team-work; however, I hated the muddy and wet conditions, and to add to it, it started to rain which made us even more cold... I enjoyed the water activities but I didn’t like getting muddy.”

It was a shame that this day saw the worst weather of the camp, since the Cadets, once wet, stayed wet, which made the subsequent kayaking more of a challenge. 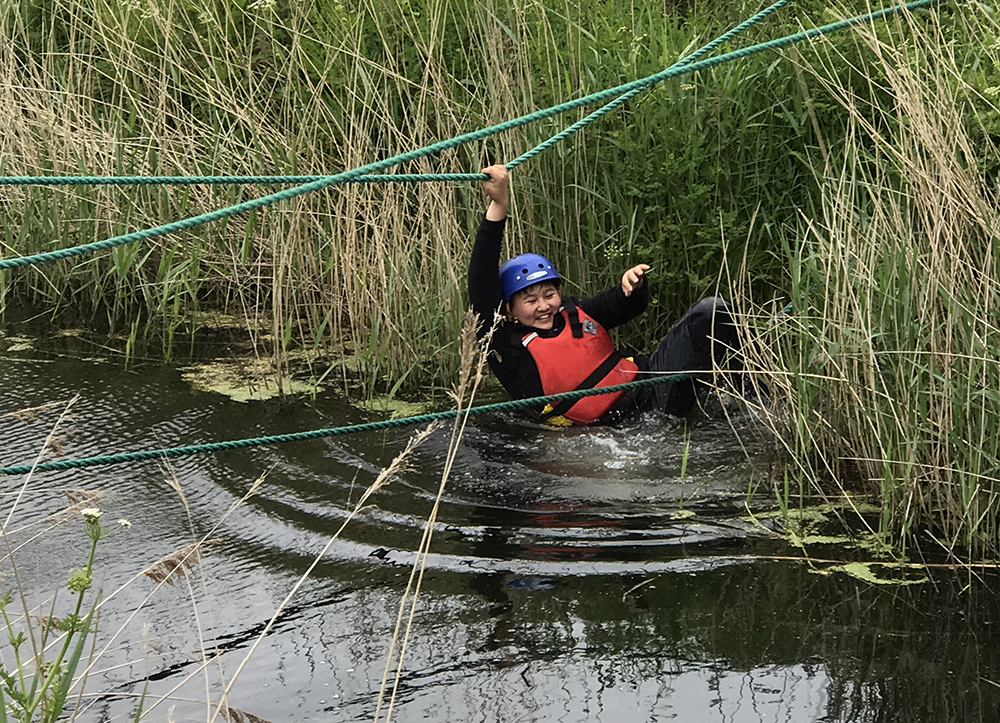 For some, the pleasure of the kayaking was mostly schadenfreude: “The kayaking was also enjoyable as you got to see your friends capsize around you." 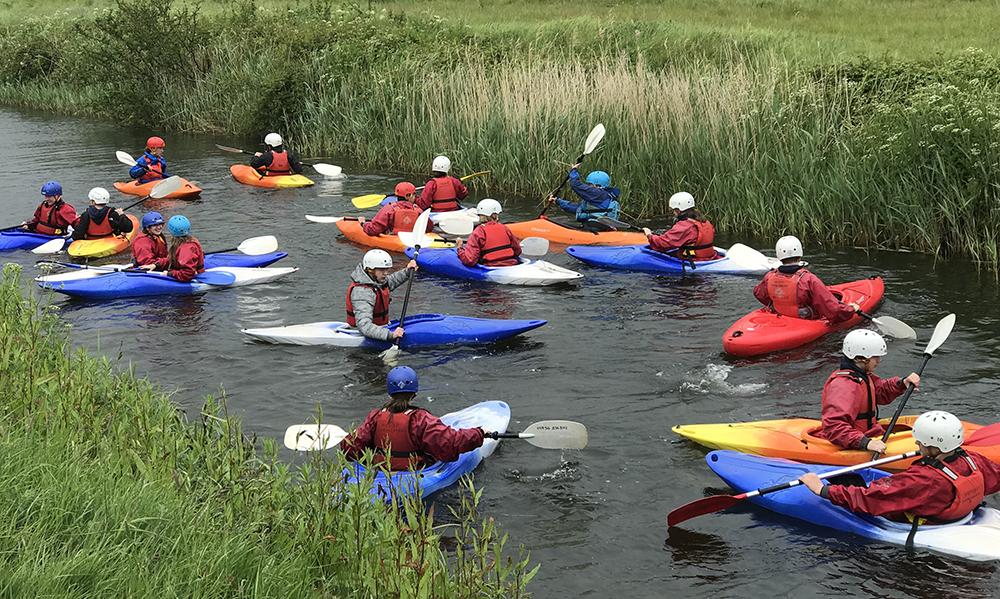 Back at the lodge, the Cadets vanished for hot showers and to try to dry their kit. About the only respect in which the lodge fell short of army accommodation was in its lack of a drying room, which would have come in very handy that day! After supper they went down to the biggest feature of the site, the dry ski slope. We had divided the Cadets into Beginners, Intermediate, and Advanced, and instruction was tailored to each.

I especially liked the skiing, as I had never skied on a dry slope and so I was not used to it; it was a great new experience... I really enjoyed skiing again: it was great, and we all got to improve at it.

An early night and late start preceded perhaps the best activity of all, climbing and abseiling in Sandford Quarry:

We woke up to the amazing activity of climbing and abseiling at a beautiful nearby quarry. I started with the abseiling. At first I was afraid of how high up the edge was, but the encouragement from the instructors allowed me to overcome this fear. After getting to the bottom of the cliff, I could go straight on to climbing. I didn’t expect to get far up the rock-face, but I surprised myself and ended up reaching the top twice! 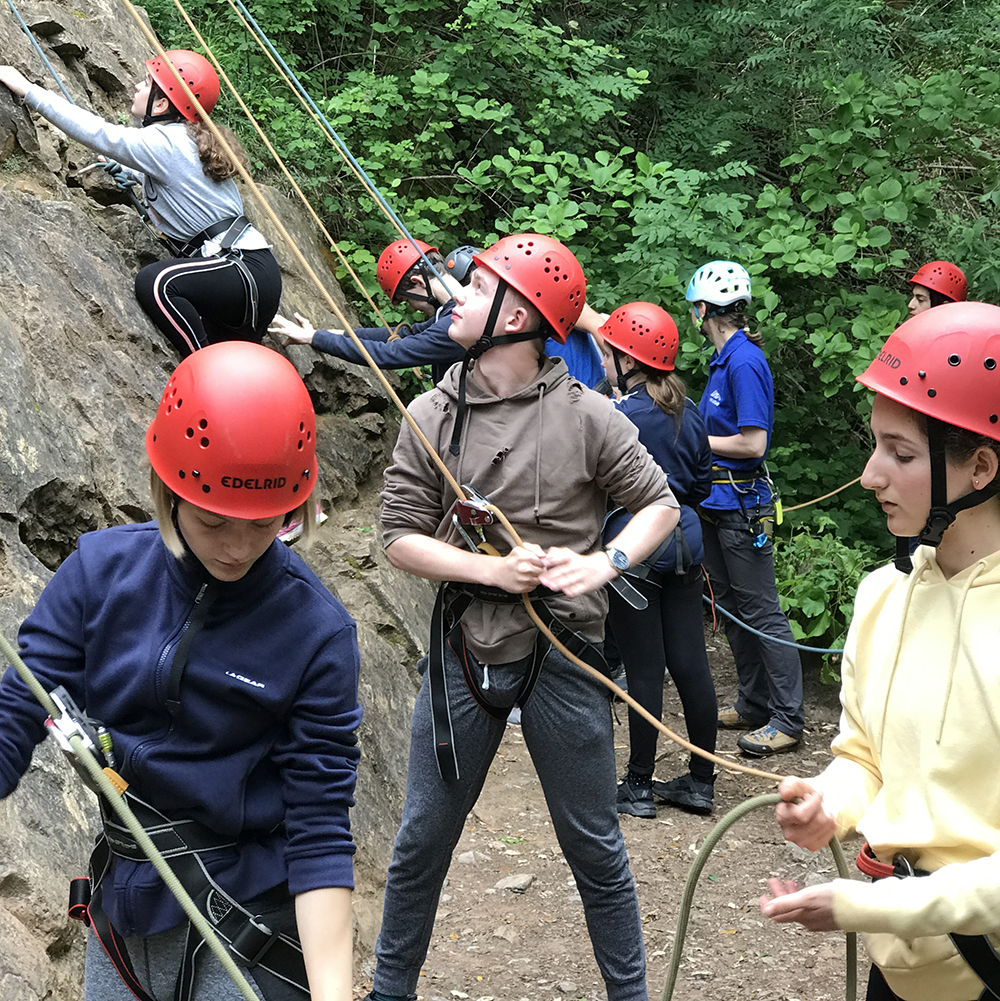 The climbing face had been set up with five pitches of increasing difficulty side-by-side, and the Cadets were encouraged to pick one and have a go. Many had climbed or belayed before on the St Benedict’s climbing wall, but even so the instructors were impressed with how quickly they took to it and how speedy some of the Cadets were, even on the harder pitches. Cadets had to work together to make the climbs, since for every climber there were usually two belayers, in whose hands the climber’s safety lay. 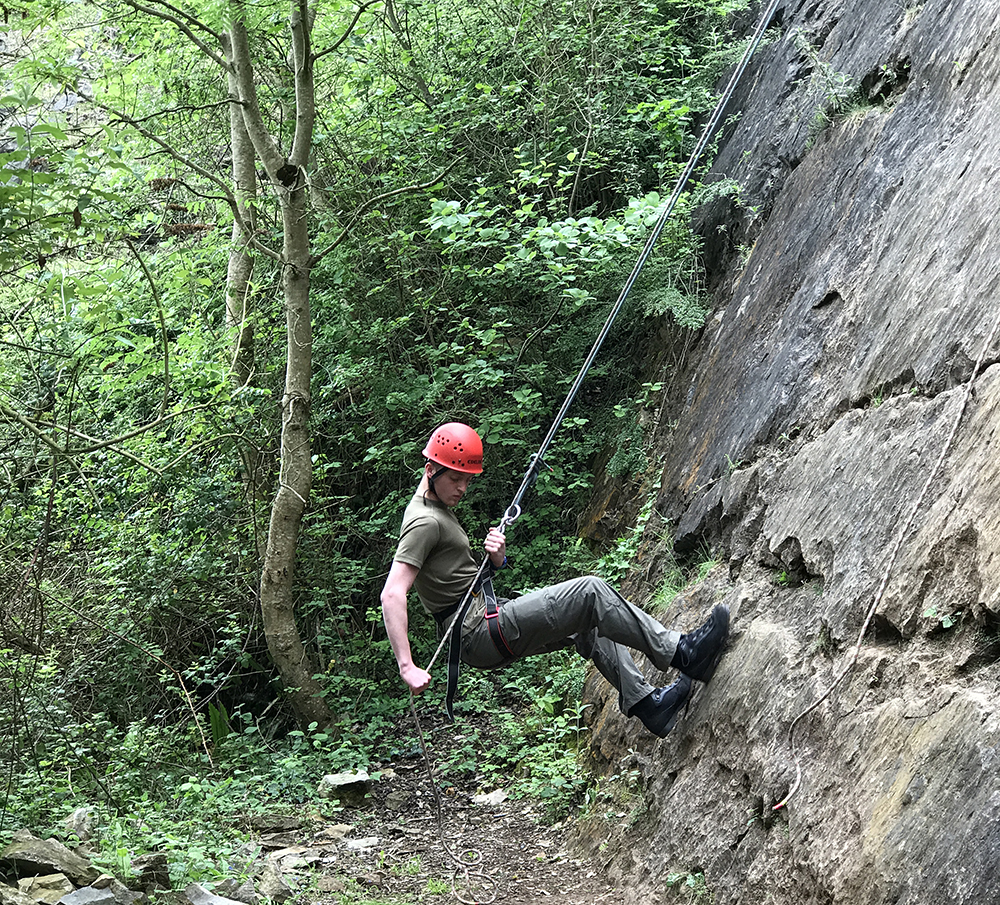 It was wonderful to see some Cadets start the session with no confidence and end it with at least one successful climb. Several Cadets pushed themselves hard to touch the carabiners which marked the top of the pitch, and grim determination not to give up was visible in many.

Within an hour of the last climb, we were on our way home to Ealing. It was clear from the Cadets’ reactions that this had been a worthwhile experiment, and one which we will repeat the same time next year.

We made several awards on our return. The ‘Best Room’ competition (based on quiz scores, performance on the obstacle course, and room inspections) was won by Room 2 (Cdts Angelica Lawson, Gabriela Makarewicz, Natalia McFadzean, Sophia Sandelson, Eleanor Sharpe, and Sophie Tripp); Most Helpful Cadet went to Cdt Christopher Vaughan; Best Endeavour went to Cdt Josh McDonald (who gave every activity his all, to the extent of total submersion in mud in the obstacle course); and Most Entertaining Cadet was Alex Ofori-Koree, whose literal interpretation of orders from his climbing instructor led to his ending up dangling a foot off the ground with his shoes several feet above his head, and whose loss of a wellington boot whilst kayaking then led to the marvellous spectacle of him diving to retrieve it whilst wearing a life-jacket... Best Cadet, however, was Cdr Sophia Sandelson, who threw herself into every activity with total commitment, and no matter how nervous or uncomfortable emerged beaming with happiness.

My thanks to SI Cuss and CI O’Connor (CW) – both Old Priorians – and to Miss Watson; without their help none of this would have been possible.

The final word, however, should go to some of the parents whose generosity and support made this trip possible for their sons and daughters:

“He had a great time - thank you again. Each time he does these things he gains more confidence. It’s important to understand your personal limits.”

“The CCF has been very good for her self-confidence. She had a fantastic time on Ex Mendip Challenge, so thank you.”