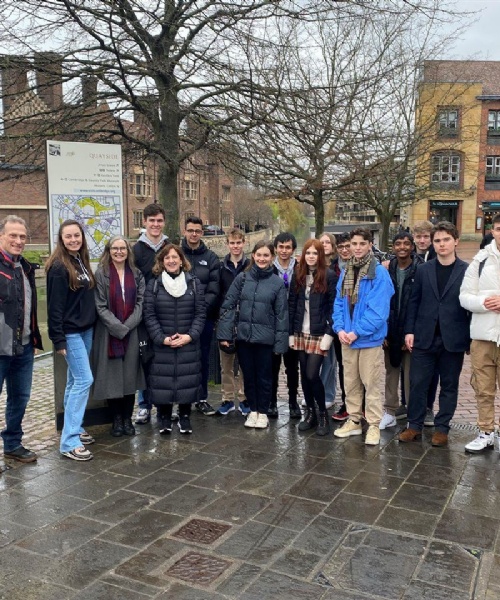 A group of Sixth Form students visited Cambridge University on February 9th, and enjoyed a tour of the colleges from two former St Benedict's students who are currently studying there.

Henry Rust, who is in Year 12 at St Benedict's, reports on the trip:

Two weeks ago, many of my friends and I were left inspired by a trip to Cambridge. Having looked at a range of colleges in the university, I not only gained a better understanding of the college system in both Oxford and Cambridge, but also enjoyed the stunning architecture and complex history of the university.

We started the day with a tour of Fitzwilliam College which, being a modern college, surprised a lot of us as it was not what we were expecting to see at such a historic university. However, when we arrived at Trinity Hall, we saw the range of colleges the university has to offer, from contemporary to more traditional. Mrs Norris, an alumna of Trinity Hall, gave us exclusive access to the college, where we had the opportunity to ask questions of the admissions officer. We then moved onto Christ’s College where we were given a tour by Valentina Elner-Kupcha OP, who was helpful in giving an insight into the college and student life at Cambridge.

Having a longer break for lunch allowed us to explore the city with a smaller group of friends, including getting into other colleges we wanted to look around. This time gave me the chance to explore two more colleges: St John’s and Jesus. In the afternoon we were given a tour of the city by Valentina (who is studying Classics) and we were also joined by Aine McColgan OP (studying Natural Sciences). Having two tour guides, studying contrasting courses, we were able to direct our questions to either Valentina or Aine depending on our areas of interest. For example, Valentina’s expertise was particularly helpful to me, as I am considering studying a humanities subject.

Overall, the trip gave us all an insight into life as a student at Cambridge, as well as aiding us in choosing a college when the time eventually comes to apply. I’m looking forward to having a similarly inspiring experience on the trip to Oxford later this term.