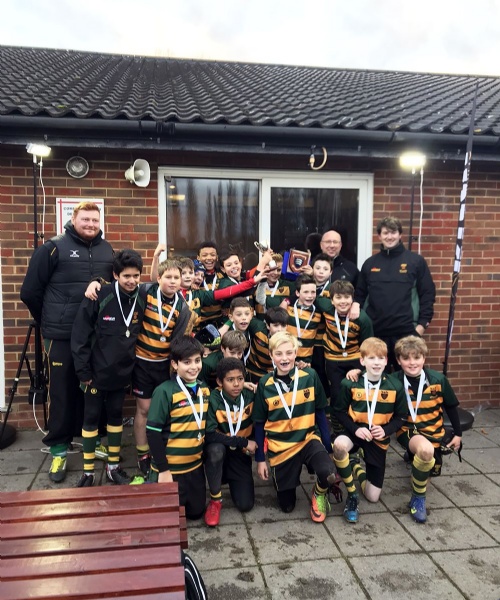 Throughout the day the St Benedict’s U12s progressed through from the group stages into the cup tournament where they faced strong opposition from Orleans Park, London Oratory and Hampton. In an exciting final, St Benedict’s scored early through an interception try from George Simpson, quickly followed by a try from Tyler Offiah. In a tense game, Hampton worked hard to play themselves back into the game and came very close to scoring on several occasions. In the 2nd half St Benedict’s then raised the tempo of the game again through further tries from Simpson and Offiah to win a resounding 20-0 victory. After the tournament Mr Jukes (St Benedict’s U12 Head Coach) said: “I was so proud of the Bennies boys, as they maintained high standards throughout the day. They worked hard for each other and solved problems during matches as they progressed.”

Player of the tournament: George Simpson

The U13s won the Middlesex Plate on November 27th, defeating University College School, Cardinal Vaughan, Latymer and Fulham Boys. The players displayed real resilience after losing the first fixture of the day to London Oratory (who were the eventual winners of the cup); they were then unbeaten for the remaining 5 fixtures. The team played some fantastic rugby and showed real progress from last year’s festival where they lost in the plate final.

Player of the tournament: Billy Delargy.