AN INTRODUCTION TO PHILOSOPHY 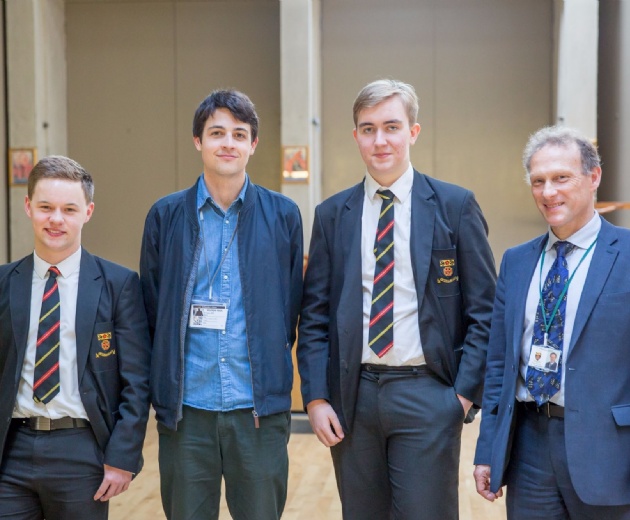 It is not every day that pupils have the opportunity to think about nothing….  But that is exactly what Form 3 did for most of a lesson. In fact they argued, discussed and reasoned about nothing with considerable enthusiasm.
This was one of a number of sessions for St Benedict’s Academic Scholars and Gifted and Talented pupils from Form 3 (Year 7) to Lower 5th (Year 10), led by a visiting philosopher.

During discussions and thinking games, the philosopher Mr Steven Harris frequently challenged pupils to think more clearly, more deeply, or to explain and justify exactly what they are saying. Mr Harris also met with Lower 6th students interested in reading Philosophy at university, and gave some useful  insights into the merits of studying this subject at a higher level. Of course, interesting discussion ensued on various philosophical points…
Thought-provoking and challenging activities throughout the day included:

• Topical discussion of Political Philosophy and the merits of various versions of democracy.
• Equality and fairness, with questions such as: ‘Is it fair that Wayne Rooney earns more in a week than a nurse can earn in 10 years?’
• Logical thinking

Here are some thoughts from participating pupils:

I really enjoyed the topic the philosopher talked to us about. I liked how he showed us quotes and asked us our opinion on them. The topic was on nothing, which made it interesting because nothing is nothing, and nothing is also something.
Gabriela

I really enjoyed the philosophy session. I thought the discussion was very interesting and it made me think about how one thing can be seen in different ways by different people. The discussion made me think deeper about a question that I would not normally think about. My favourite idea was that if the hole in the Polo mint was nothing, and nothing meant ‘not anything’, then it wouldn’t be there at all, but it is, so nothing must be something. My other favourite argument was that when we think about nothing it becomes something, and that nothing already is something because someone would have had to think about it to have the idea of the hole in the mint.
Sophie

I enjoyed the opportunity to express our own opinions and to disagree with others about different situations. What was also interesting was how you could give one opinion and explain it, then be given a different situation by Mr Harris and have your opinion changed.
Shania

I very much enjoyed the philosopher's talk. He involved everyone and made me think about how to justify my arguments. My favourite discussion during the talk was about the difference in salary.
Amy

I really enjoyed today's session with Mr Harris. I believe that I gained a lot from this activity and I think we all benefited from this.
Anthony

I thoroughly enjoyed it and felt that I learnt a lot about both the basic ideas of what philosophy is as well as the heated debate of how the election should or could be won. (In my opinion, a combination of democracy, epistocracy and scholocracy would produce one fair and just voting system.)
Jake