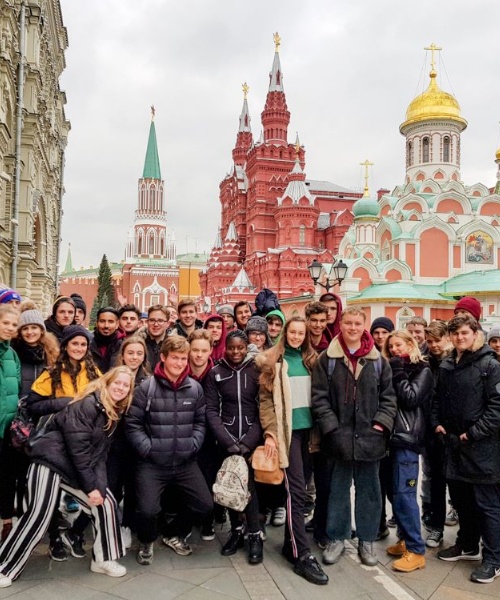 St Benedict's historians travelled to Russia in October, to mark the 100th anniversary of the Russian Revolution 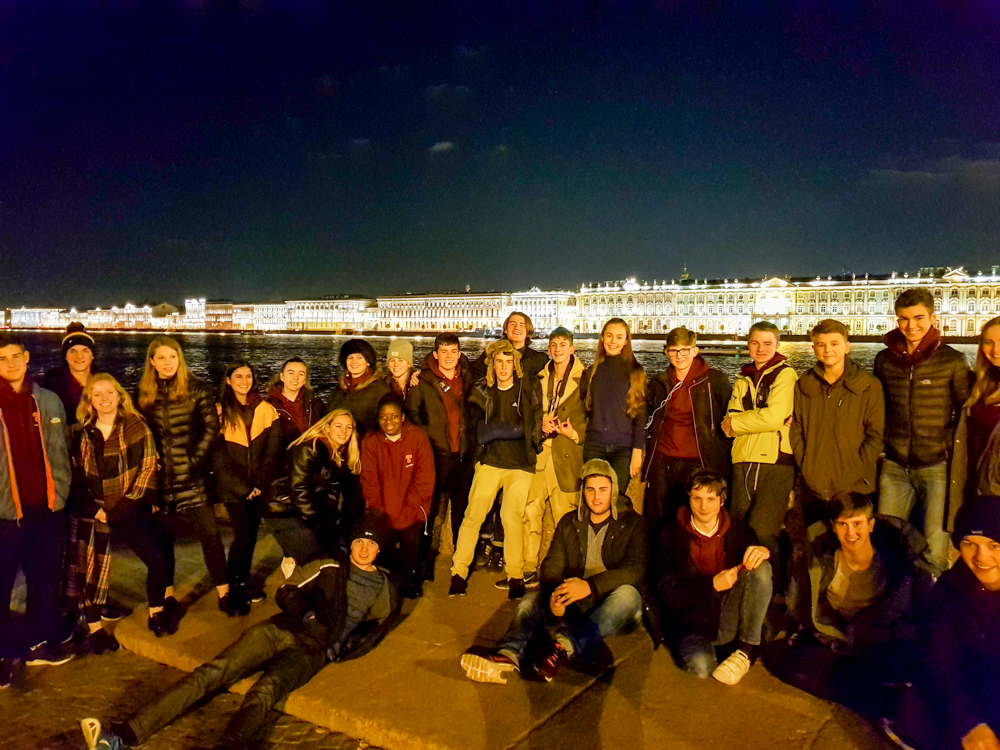 When we arrived, we visited the Heroic Defenders of Leningrad War Memorial and Museum. We saw many interesting artefacts; one of the most moving was a replica of a daily portion of bread on which each Russian person survived for the duration of the war - a mere 125 grams. We learnt of the hardship and famine experienced by millions during the Leningrad Blockade from 1941 to 1944. Following dinner, we completed a night tour of St Petersburg where we visited different memorial sites of Russian leaders. We drove through the infamous Nevsky Prospekt, a long shopping avenue, and the centre of the bustling St Petersburg.  This gave us a rounded view of the lively, dynamic and European-like nature of St Petersburg. 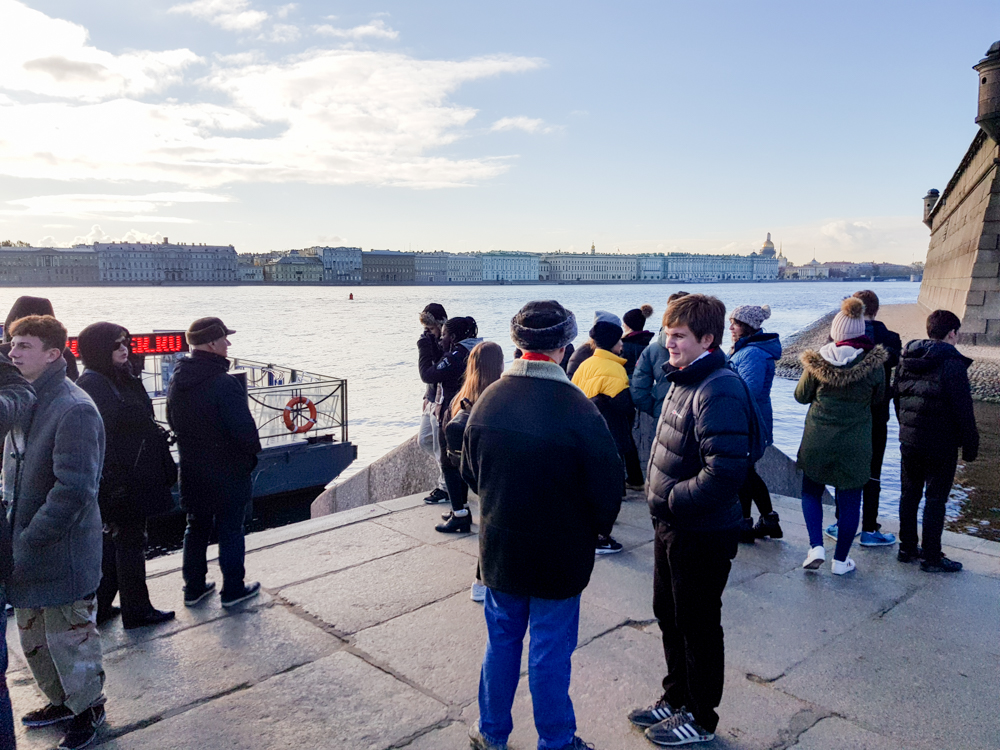 On the second day of our trip, we started the morning by visiting the Cruiser Aurora and learned about its rich military history. It was a vital battleship used by the Russian naval forces during the Russo-Japanese war. The Aurora was also used through the First World War, patrolling the Baltic Sea, and later in the Second World War as a major training ship. It was fascinating to think that one ship had experienced so many different conflicts throughout Russia’s history. Later on, we travelled to Finland Station in Lenin Square which is most famous for being where Vladimir Lenin returned on the 16th April 1917 after his exile in Switzerland, to start organising the momentous October Revolution. This is commemorated by a large statue of Lenin just outside the station. We then visited the Hermitage Museum, the largest museum of art and culture in the world. It holds a vast range of collections, from ancient Egyptian to 20th century German art; the numerous pieces of art cover a huge breadth of history. It was not discovered until 1991 that some paintings that were looted by the Red Army in Germany were also held in the Hermitage.  We then went to the Marriinsky theatre to watch a production of Giselle; a romantic ballet telling the story of a nobleman, the Duke Albrecht of Silesia, who falls in love with a peasant girl, Giselle. The plot follows several men who fall in love with Giselle and the troubles brought about by love and magic, against the background of the Rhineland in the Middle Ages. The traditional choreography that has been passed to the current production derives mostly from early 20th century choreography for the Imperial Ballet in St Petersburg, and this reveals the strong connection the city has to this ballet in particular. 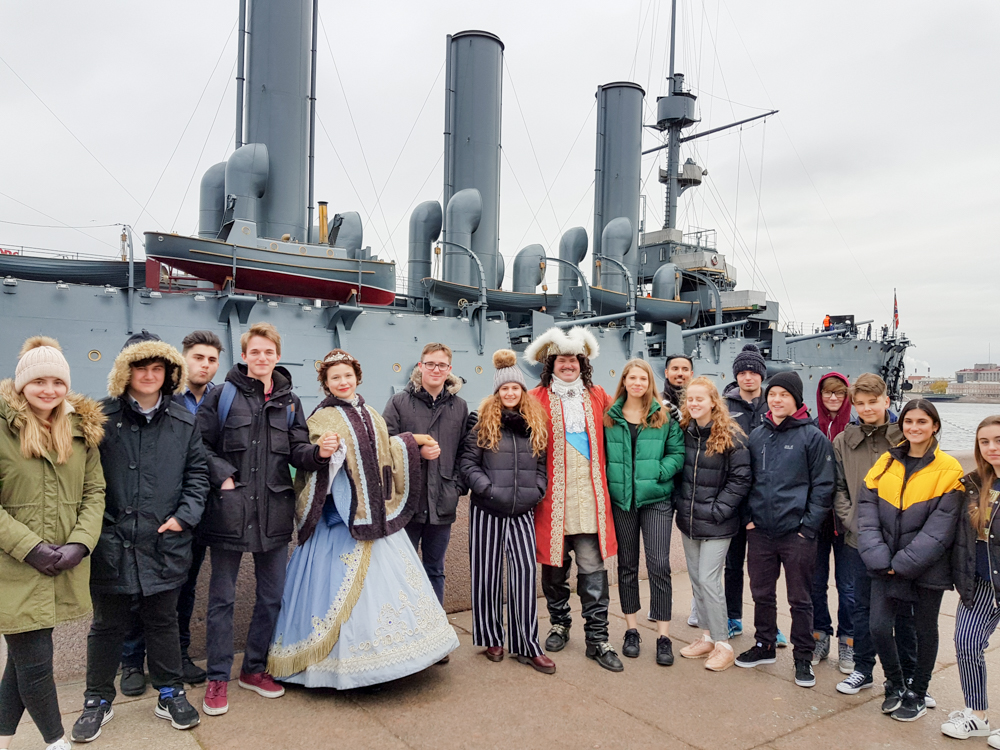 Our third day in Russia began with a trip to the Peter and Paul Fortress. It was founded by Peter the Great in 1703, but was used as an execution ground for Bolshevik forces; from 1918 to 1921 at least 112 persons including 4 Dukes were killed there. We went inside the beautifully decorated cathedral which has now been converted to a museum. The Church of the Saviour on Spilled Blood was our next stop, and we learnt how it was built upon the site where Alexander II was fatally wounded by political activists in March 1881. The church was built between 1883 and 1907 under Alexander III. Furthermore, in the aftermath of the Russian Revolution, the church was ransacked and was ultimately closed in 1932. However, it became a crucial point of help during World War II as the site became a temporary morgue to many of those who died during the Siege. We were also able to see the Smolny Institute, the building chosen by Lenin as the main Bolshevik headquarters during the October Revolution. Lenin himself also lived there for several months before the government was transferred to Moscow. The institute was also the place of Sergei Kirov’s execution, a prominent Bolshevik leader who was allegedly purged by Stalin in 1934. Following this, we visited the Museum of the Political History of Russia, where our guide told us how central these offices were to the events of revolution in 1917. It was a vital planning and coordination point for the Bolsheviks, and we saw much of the Bolshevik propaganda of the 1920s, as well as Revolutionary banners of 1917. There were many temporary exhibitions set up, with memorial rooms such as Lenin’s Study and the Room of the Secretariat of the Central Committee. These provided us with a realistic idea of the lead up to revolution. After a long day of visiting important sites, we headed to a traditional Russian folk show, filled with singing and dancing as well as some very entertaining audience participation. It was an energy-filled evening with many unusual yet enjoyable performances from a very impressive cast. It was a great way to end our time in St Petersburg as it emphasized the colourful culture and tradition of the city, as well as the pride those who live there take in their heritage.

Overall, our trip to St Petersburg really highlighted the importance to the Russian people of their past, due to such a strong historical presence all over the city. Our tour guide often alluded to the complexity of Russia’s history; how you cannot generalize every person’s experience of a ruler as every individual’s perception of each ruler is different. This became clear from how revered Lenin is today against the more cryptic way in which Stalin is remembered. St Petersburg’s deep rooted ancestry gave all of us an insight into Russia’s deep history, from Tsarism to Vladimir Putin, and allowed us to experience the fascinating Russian culture.

The sleeper train from St Petersburg to Moscow was an interesting experience to say the least. Squeezing four Upper 6th boys into a tiny cabin with their luggage was something of an achievement. The thin walls between cabins meant little sleep, but at 7am  we pulled into Moscow.

Driving around the city we were able to gauge the busy Moscow life, including the heavy traffic we experienced. Insights from our guide gave us an intimate appreciation of the type of life led in Moscow. We saw specific Russian architecture such as Khrushchev and Stalinist buildings, which  related directly to our studies. Passing the impressive cathedrals and buildings of significance such as the FSB (formerly KGB) headquarters gave us a visual representation of the complicated history of Russia. The absence of windows at the top of this building was an eerie reminder of some of the more gruesome periods of Russian history. 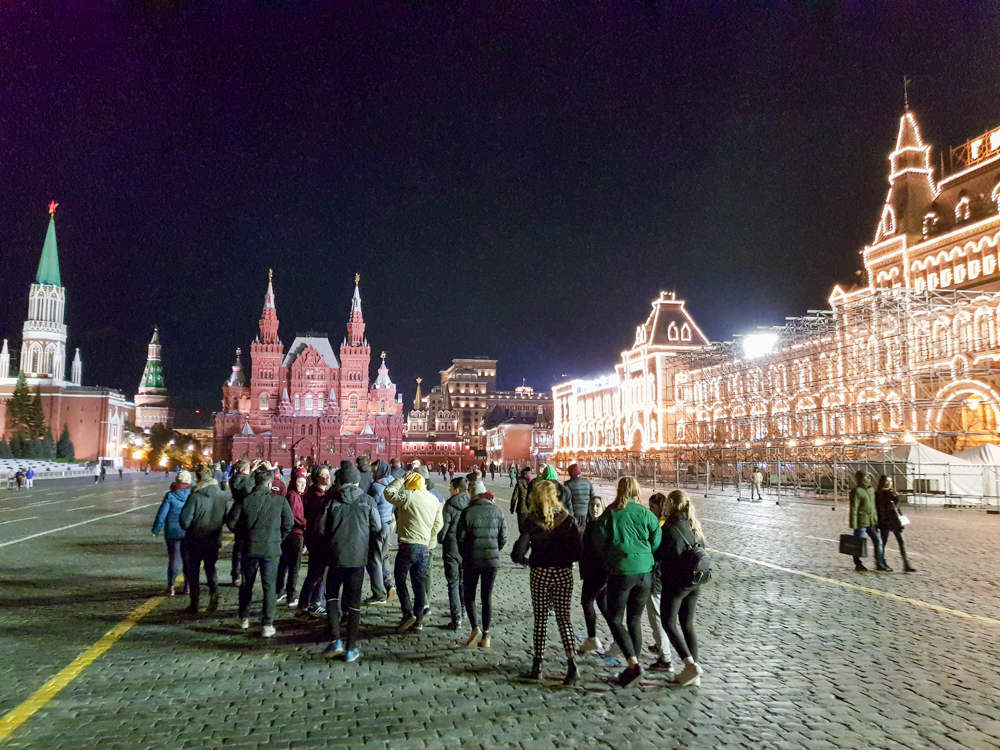 After breakfast in a heavily decorated Ukrainian restaurant, we headed to the sculpture park housing many of the statues that were situated around Moscow but were removed. This gave us examples of certain types of Communist propaganda, such as towering statues of Stalin as well as the busts of significant Communist figures. It also demonstrated to us how the Russian people do not forget the past, but don’t celebrate it either. 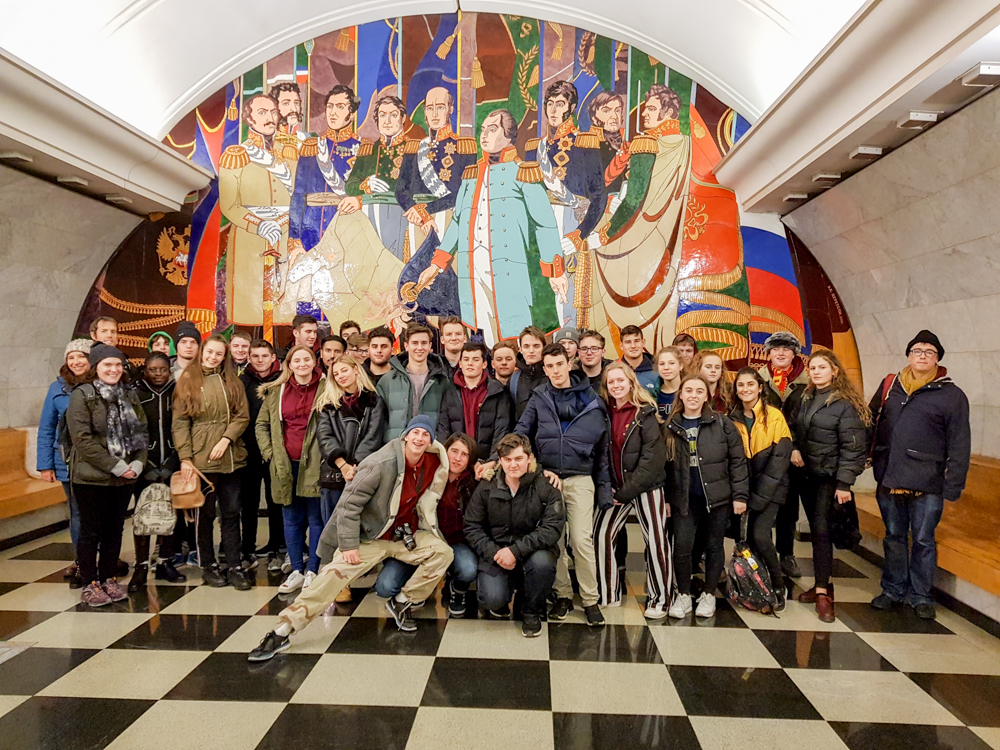 We experienced the Russian metro. We were all surprised at the incredibly elaborate chandeliers and mosaics that featured in these stations, presenting Socialist realism pictures. Not quite the Ealing Broadway station we are used to.

Next was our visit to the Red Square when we were able to visit beautiful cathedrals, very unlike ones we had experience before, such as St Basil's. These built on the knowledge of the Tsarist history we had explored in St Petersburg when visiting some of the graves of the other Russian Tsars and the ornate architecture. 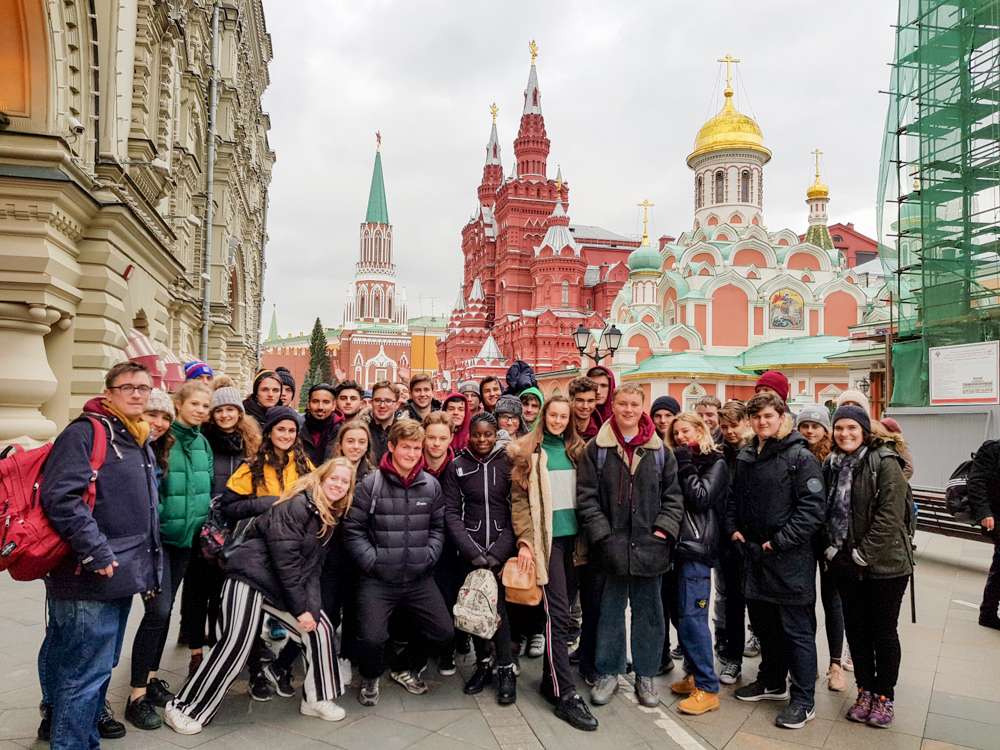 The experience of visiting Lenin’s Mausoleum was truly terrifying. Only after a strict search and a path through metal detectors were we allowed into the building. Under the watchful eye of the Russian military we were able to quickly walk around the low lit room that held Lenin’s body. It was an interesting experience seeing in the flesh what we had only studied. This taught us how significant Lenin’s fundamental changes to Russia were, highlighted by how the Russian people still have his body immortalised. This contrasted with the removal of many statues of Stalin to the NHVD park, and gave us a sense of how the Russian people deal with their past history.

The buildings of the Kremlin were next on the agenda. We were surprised at how freely people seemed to walk around this government area, but noted that we were still under the watch of the Russian military. We saw many of the places Putin now frequents, but also the still existing Communist buildings.

The next day we visited the New Tretyakov Gallery which held many examples of Socialist art and how it changed through the period. We saw examples of Communist propaganda and socialist realism, giving us an idea of the kind of lifestyle and culture experienced at the time. Our guide was able to give us detailed, contextual information about certain paintings. We explored the contrast between the artistic interpretation of the idealistic Soviet worker and the reality that the workers experienced. We also saw some presentations of significant political moments, and our guide was able to give us the context of each person featuring in the portraits, and their ends, which were often ominous. This gave us a visual representation of the Russian experience of war, and the shifts in culture throughout the period. The examples of Communist propaganda gave us an insight into the ideals of the ideology contrasted with the reality of the period.

On the flight home we were able to reflect on how the history of Russia is still highly significant today, and how the consequences of those events are still evident in Russia’s current government and culture.